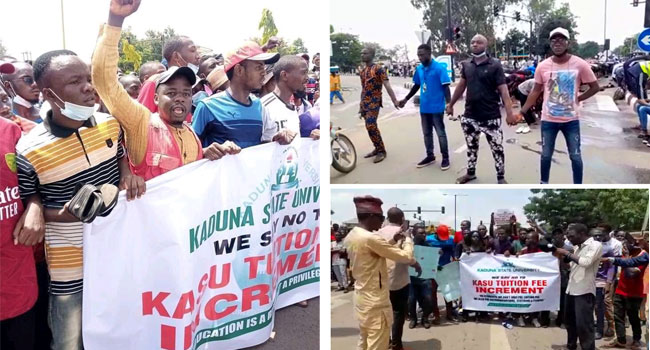 Students of the Kaduna State University (KASU) on Tuesday blocked the main road leading to the Government House in Kaduna, the state capital in protest over an increase in their tuition fees.

The state-owned tertiary institution recently announced an increase of its annual school fee of N26,000 by almost 600%.

According to the proposed new tuition fees, indigenous students studying social science courses are to pay about N150,000 while their counterparts in medicine and other science courses will pay between N170,000 and above as annual fees.

In reaction to this, the students blocked the road leading to the Kaduna State government house displaying placards with various inscriptions and chanting songs of solidarity.

The students blocked all the major roads to the government house, thereby preventing the free flow of traffic. They insist their demands must be met by the state government.

Some of the students conducted prayers on the main road while the others watch.

Security operatives were also on the ground to ensure that there is no breakdown of law and order.

They, therefore, demanded a reversal of tuition fees.

They called on the State Governor Nasir El-Rufai whose policy is to ensure that children of common people are given access to Education to intervene.

The Kaduna State University has about 19,000 students population, out of which close to 17,000 of them are indigenes.