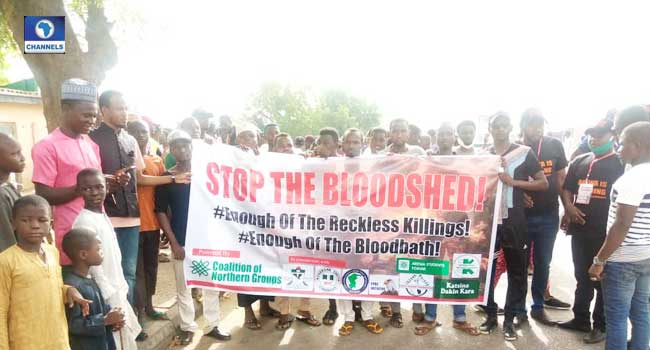 Children and youths in Katsina on Thursday, held a peaceful rally, denouncing violence against women and children across the world.

The rally which was held in collaboration with Save the Children International took place within the premises of the Department of Girl Child Education and Child Development at the old Government House, Katsina while the children carried various posters and banners to denounce violence against women and children.

Some of the messages on the posters and banners read’’Rape is wrong; Say No to child abuse; Be a man, respect a woman; Stop it while you still have a voice and Violence is never a solution. Say no to child abuse,’’ among others.

A director in the Department of Girl Child Education and Child Development, Hajiya Yahanatu Abdullahi, said the rally was in commemoration of the International Day against Gender violence.

She said the rally was the climax of sixteen-day activities to commemorate the day in Katsina.

Hajiya Abdullahi said the children had in the last sixteen days, among others, visited the Katsina and Daura emirate councils, engaged in a public lecture, and attended a radio programme as part of activities to mark the day.

A member of the Civil societies Organization in the state, Hajiya Rabi Muhammed , while addressing the children at the rally urged them not to keep mute when they are abused or violated.

She observed that both male and females could be abused, but cautioned the children against keeping silent when they are abused or violated.

“Everybody should voice out against gender-based violence as anybody can fall a victim of violent abuse,” she declared.

Hajiya Muhammed appealed to Governor Aminu Masari to assent the recently passed Child protection bill so that children in the state would know that there is constitutional provision for their protection and rights to both western and religious education as well as to a better life.

She added, “We shall also appreciate it if the state can create a center where issues concerning children abuse and molestation are earnestly attended to.

“This is in addition to the current efforts by the state government to ensure that children in the state are protected under the law.”