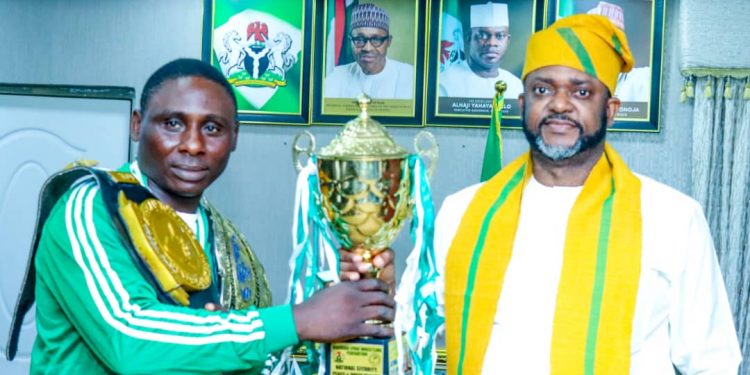 NIGERIA
His Excellency, the deputy governor of Kogi State, Dr. Edward Onoja, has received the Kogi-born professional wrestler and current African middleweight Champion, “Ali King” Attai Muhammed in his office in Lokoja.
Ali King who hails from Okpo in Olamaboro Local Government Area of Kogi State, is the current Winner of this year’s National Security, Peace, and Unity Trophy organized by the Nigeria (Pro) Wrestling Federation.
In a statement released by the governor’s media aide, Promise Emmanuel, the peace ambassador described the  Yahaya Bello and his Deputy, Chief Dr Edward Onoja as a formidable tag team whose leadership styles are sources of hope for youths in Kogi and Nigeria.
He lauded Governor Bello for his lofty achievements in the areas of security, healthcare, infrastructure, education, and agriculture, with the promise to keep the Kogi Flag flying, noting of his upcoming bout with Chris Kurtis slated for December in Kogi State, which he said, will also attract other global top-flight wrestlers to the Confluence State.
The deputy governor commended the fighter for projecting the Kogi image positively, stating how his boss has provided the platform for potential youths to thrive.
Onoja said Kogi is in perfect shape to attract the globally acclaimed fighters which is a win-win situation for the fighter and the State’s tourism sector.
Highlights of the visit were the presentations of the wrestler’s accolades, belts, and trophy to the deputy governor.
Share this story

Ubani warns APC against imposition of leadership in Abia