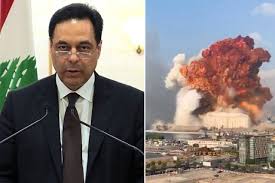 A Lebanese judge has charged caretaker Prime Minister, Hassan Diab and three ex-ministers with criminal neglect over the huge explosion at Beirut’s port that killed more than 200 people on August 4.

Diab, as well as two former public works ministers and an ex-finance minister, were accused Thursday, December 10, of criminal neglect “that led to the death and harm of hundreds of people” in the blast

The indictment is the most high-profile indictments that have come about since an independent investigation of the explosion began.

The explosion destroyed much of Beirut’s eastern coastal area, killing more than 204 people, injuring at least 6,500, and displacing around 300,000 from their homes.

The explosion was believed to have been caused by the detonation of thousands of tons of ammonium nitrate, stored for years at the port of Lebanon’s capital.

Judge Fadi Sawan, who is investigating the incident, will interrogate Diab and the other charged ex-ministers next week.

“The Prime Minister’s conscience is clear. He is confident that his hands are clean and that he has handled the Beirut Port blast file in a responsible and transparent manner,” read a statement from Diab’s office on Thursday after the charges were leveled.

“Hassan Diab will not allow the Premiership to be targeted by any party.”

Diab’s government, which stepped down in the wake of the blast following worldwide criticism, will be replaced when a new cabinet is formed.

His government has repeatedly acknowledged receiving prior warnings about the dangers posed by the storage of the explosive material at the port.

According to reports, previous governments were also notified about the warehouse, but no one addressed the problem.

The streets of Lebanon have seen widespread protest fueled by anger since the blast.

COVID-19: UK To Close All Travel Corridors From Monday

The Republic of Congo will hold its