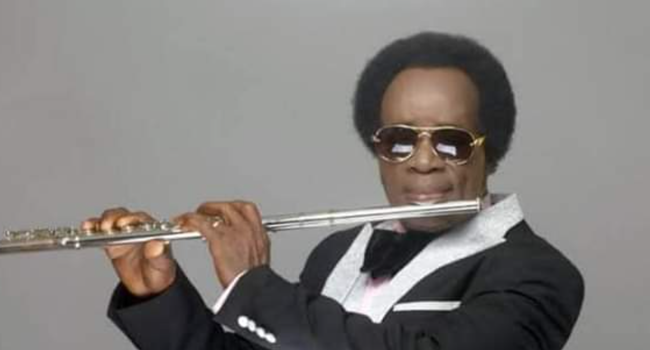 Veteran musician Victor Uwaifo has died at the age of 80.

He reportedly died on Saturday in Benin-City.

The multi-talented icon was also a songwriter, sculptor and professor.

Family members say they are in a terrible shock but will provide an official statement in due course.

Uwaifo was renowned for his mastery of the guitar and the flute.

He won many musical awards both nationally and internationally.

His stagecraft and music prowess left millions of his fans in awe throughout his career.

He will be remembered for hit songs like ‘Mami Water’, ‘Joromi’ and ‘Guitar Boy’.

He was the first professional musician to be awarded the National Merit Honours of Member of the Order of the Niger (MON).

Uwaifo served as Commissioner for Arts and Culture in Edo State between 2001 and 2003.

Meanwhile, President Muhammadu Buhari has condoled with the family and friends of the legendary musician.

In a statement signed by presidential spokesman Femi Adesina, the President said the entire country will miss him.

“President Muhammadu Buhari condoles with family, friends and associates of legendary musician and multi-talented artiste, Sir Victor Uwaifo, who passed on Saturday, leaving a legacy of successes in many areas of life, including academia and administration,” the statement said.

“The President joins the Nigerian music industry and performing artistes, home and abroad, in mourning the former first Honourable Commissioner for Arts, Culture and Tourism (Edo State), who was also the first musician and instrumentalist to be given National Honours Merit, Member of the Order of the Niger (MON) in 1983.

“President Buhari believes the renowned musician, with global appeal and recognitions, lived for many firsts, which include invitation to the State House by four presidents and Heads of State, and winner of a gold disc in Africa for his song, ‘Joromi’, released in 1965 at the age of 24.

“The President notes the glory that Sir Uwaifo brought to Nigeria through his international tours, and the active role he played in national development, returning to school to get a first degree at age 54 with first-class honours, a masters degree at 56, and a doctorate at 77.

“President Buhari prays for the soul of the departed musician, writer, sculptor, musical instrument inventor and university lecturer, knowing the entire country, particularly the music industry, will sorely miss him.”

NDA ATTACK: WHEN THE MILITARY APPEARS WEAK IN THE FACE OF DANGER

Messi To Play With Neymar And Mbappe For First Time, Says Pochettino