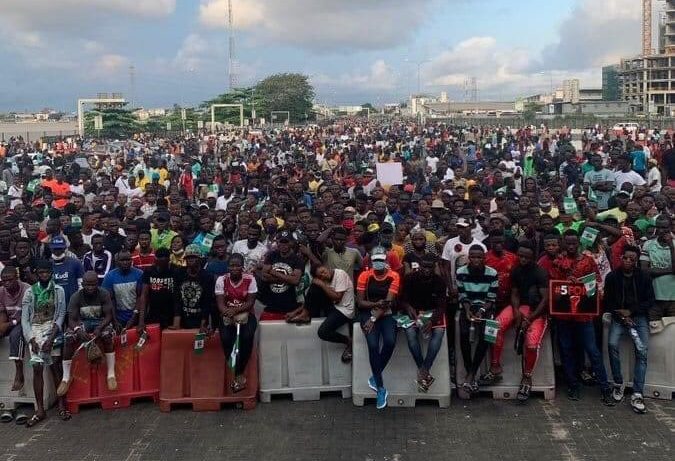 The Nigerian Army has filed papers at the registry of the Lagos State Panel of Judicial Inquiry probing the alleged shooting of #EndSARS protesters at the Lekki tollgate on the night of October 20.

One of our correspondents saw about three military men on Friday filing papers at the panel’s registry.

Investigations revealed that the army had filed papers ahead of its appearance before the panel.

It said it was also bringing before the panel expended and unexpended blank ammunition, which was used to disperse the crowd by firing into the air on 20th day of October, 2020.

The army has also submitted 13 flash drives containing the recorded videos of the soldiers’  involvement in the incident.

Our correspondent gathered that the testimony of the Army was listed as number one on the panel’s list for Saturday (today).

Confirming the earlier report on the scheduled appearance of the army before the panel, the source added that the army’s testimony was listed as number one on the panel’s list for Saturday (today).

But it is unclear whether the army will still appear before the panel today as scheduled as the panel on Friday adjourned further hearing in the Lekki tollgate shooting till November 10.

The adjournment followed the inability of the panel to watch till the end on Friday the video footage of the incident submitted by the Lekki Concession Company, operator of the Lekki tollgate.

The panel was able to view only four hours of the 20-hour video footage.

#EndSARS lawyer clashes with LASG, others over CCTV footage

Before the commencement of the footage viewing on Friday, counsel for LCC, Mr Rotimi Seriki, had suggested that only the portion relevant to the probe should be viewed.

Backing him, counsel for the Lagos State Government, Mr Jelili Owonikoko (SAN), said he had had the opportunity of watching the video and the portion relevant to the probe should be from 5pm of October 20.

But counsel for the #EndSARS protesters, Mr Adesina Ogunlana, insisted that the entire 20-hour footage be viewed on the grounds that “we should not sacrifice quality for speed.”

Though the panel normally ends its sitting by 4pm, the footage was watched till about 5pm when there was a power outage in the building.

Seeing that after over four hours of viewing, nothing eventful had been seen in the soundless video, Justice Okuwobi asked Ogunlana if he still wanted the entire 20-hour video to be watched, to which Ogunlana responded, “I will wait; it’s a marathon.”

But intervening, Owonikoko submitted that lawyers had a duty to assist the panel, stressing that having viewed the video, the portion relevant to the panel’s mandate would be from about 5pm on October 20.

“We can all agree on what portion of the footage is relevant to this panel,” Owonikoko said, adding that for transparency sake, Ogunlana should be given a copy to also go and watch.

Aligning with Owonikoko, LCC’s lawyer, Seriki, recalled that he had earlier suggested that the viewing should be limited to the portion relevant to the mandate of the panel, explaining that the LCC only made the entire 20-hour footage available to demonstrate transparency.

Seriki argued that the panel could not afford to waste time watching the entire footage because it had only six months to sit and it still had petitions from victims of human rights abuse by the disbanded Special Anti-Robbery Squad to contend with.

But Ogunlana maintained his stand, saying every second of the footage was important to him because “people died on my side.”

Facing the lawyers for Lagos and LCC, Ogunlana said, “We lost lives here, you lost money.”

However, intervening, a representative of the Nigerian Bar Association, Mr Bernard Onigah, urged the panel to narrow the viewing to the relevant portion.

In the end, it was agreed that a copy of the footage should be given to Ogunlana, so he could go and view after which he should decide whether the panel needs to view the entire footage.

Justice Okuwobi approved Ogunlana’s request for 48 hours to view the footage and then adjourned till November 10 for further proceedings into the Lekki incident.

Meanwhile, three of the #EndSARS protesters on Friday appeared before the panel, demanding, through their lawyer, Ogunlana, to be granted an audience.

Ogunlana, on behalf of the protesters – Victoria Oniru, Dabira Ayuku and Perpetual Kamsiyuchukwu – said he intended to cross-examine the Managing Director of the Lekki Concession Company, operator of the Lekki tollgate, Abayomi Omowuwa, who started his testimony before the panel on Tuesday.

Though counsel for the Lagos State Government,  Owonikoko, and LCC lawyer, Seriki, earlier opposed Ogunlana’s appearance on the basis that “#EndSARS” is not an entity known to the law, they later withdrew their objection when Ogunlana called out his three clients.

“I am not representing spirits or ghosts. We’re here to tell the truth. These are part of the people running underground, being threatened,” Ogunlana said in response to the objection by Owonikoko and Seriki.

Owonikoko had described #EndSARS as a nebulous entity with no structure or leader, questioning where Ogunlana got his instruction to appear before the panel.

Seriki, on his part, had said since the LCC Managing Director was before the panel on a subpoena, “he cannot be cross-examined by every Tom, Dick and Harry.”

Following the withdrawal of an objection to Ogunlana’s appearing, Justice Okuwobi, in a ruling, admitted the protesters as a party and allowed their lawyer’s appearance.

The Lagos State Government has rejected a Freedom of Information request for the CCTV footage of the shooting of unarmed protesters at the Lekki tollgate on October 20, 2020.

This is contained in a letter written by Deyemi Bamgbose on behalf of the state Attorney General.

A human rights lawyer, Inibehe Effiong, had written a letter to the state government last week invoking the Freedom of Information Act 2011.

Effiong had in the letter addressed to Governor Babajide Sanwo-Olu, requested the CCTV footage in the interest of the public.

However, in a response dated November 3, 2020, titled, ‘Re: Urgent Request Pursuant to the Freedom of Information Act 2011’, the state government said it could not make the CCTV footage available because the FoI Act was a federal law and it didn’t apply to states.

The government also cited a 2018 Court of Appeal judgement to back its claim.

The letter read in part, “I am further directed to inform you that the laws of Lagos State do not include the Freedom of Information Act which is a federal law that is not applicable to the state. As such, your request cannot be granted.”

The state government said in the case of EDOSACA vs Osakue and others in 2018, the Court of Appeal ruled, “My strong view on it is that given the provisions of the said Act as presently enacted vis a vis Section 4 of the 1999 Constitution and Items 4 and 5 of Part 2, 2nd schedule thereof, the applicant is not bound to comply with the provisions of the Freedom of Information Act 2011.”

Another Court of Appeal in Akure in April 2018 had ruled that the FoI Act was applicable to all states of the federation but the Lagos State Government selected the ruling that could justify its decision not to honour the FoI request.

The FoI Act, which was signed into law by former President Goodluck Jonathan in 2011, makes it mandatory for public records to be made available to those who request it.

However, Lagos State and many others have in the last few years refused to honour FoI requests even as civil society groups accuse them of running an opaque government.

The Lagos State government is known for ignoring FoI requests on its activities from journalists and civil society organisations.

An FoI request by Socio-Economic Rights and Accountability Project to the state government to explain how a $90 million World Bank loan for the upgrade of public schools was spent was rejected by then Lagos State Governor, Babatunde Fashola (SAN), in 2014.

The Chief of Staff to the President, Ibrahim Gambari, joined the meeting, which held behind closed doors inside the President’s office.

The agenda of the meeting was not made public. But the Presidency, in a tweet posted on its Twitter handle, @NGRPresident, said Sanwo-Olu presented to Buhari documents detailing the violence unleashed on the state in the aftermath of the #EndSARS protests.

The message read, “President @MBuhari this afternoon met with Governor @jidesanwoolu of Lagos.

“The governor presented a report on the extent of the destruction suffered by Lagos State in the aftermath of the EndSARS protests.”

The message was accompanied by pictures depicting where the governor was presenting the report to the President and where Buhari, the governor and Gambari were going through the report.

Sanwo-Olu did not grant any press interview at the end of his meeting with the President.

As of the time of filing this report, the Presidency had yet to issue a statement on the meeting.

Ministers from the South-West during the week called on the Federal Government to assist the Lagos State Government in restoring some of the public facilities destroyed in the aftermath of the #EndSARS protests in the state.

They identified 15 police stations, the state High Court building and others as parts of facilities destroyed during the period.

The ministers also urged the government to investigate the involvement of the army in the reported shooting of protesting youths at the Lekki tollgate.