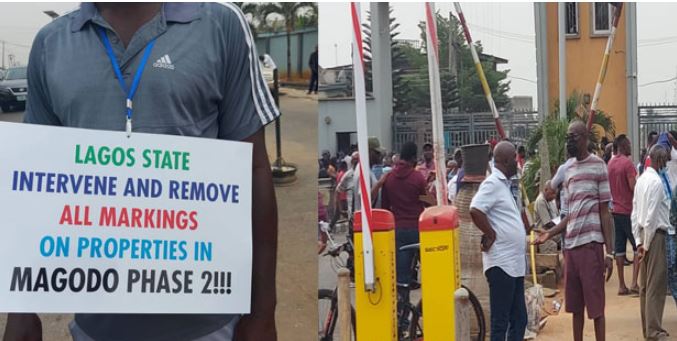 Residents of Magodo Phase II Estate have protested the marking of their properties and a planned takeover of the estate.

The residents on Tuesday converged in front of the estate and displayed various placards lamenting over the situation and seeking the Lagos State government’s intervention.

Some officials were seen escorted by heavily armed riot police in the state apparently with the aim of enforcing Supreme court judgment to seal the properties.

The officials used red, brown, and blue inks to inscribe ‘ID/795/88 Possession Taken Today 21/12/21 by Court Order,’ on various properties on the estate.

The resident and house owners during the protest called on the Lagos State government to settle this dispute which has lingered for over 30years.

He lamented that the policemen had remained in the estate despite Governor Babajide Sanwo-Olu’s intervention, adding that residents had been living in fear as the policemen move around with their weapons.

Earlier in December, some police officers said to have been accompanied by hoodlums arrived at the estate with bulldozers.

Residents said the plan of the invaders is to takeover 549 landed properties in the estate.