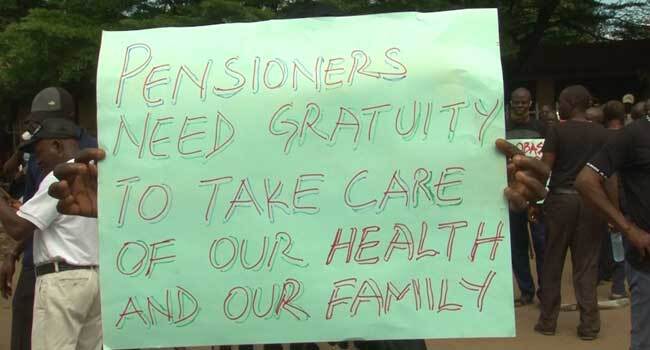 An elderly man on Monday collapsed in Edo State as retirees protested over their unpaid pensions and gratuities by the state government.

During the exercise, the senior citizens disrupted the flow of traffic at Ring Road in Benin City, the state capital while airing their grievances.

Suddenly, one of their colleagues slumped, a situation that forced the other protesters to suddenly rush him to a nearby hospital for treatment.

According to them, the non-payment of their gratuity dates back to the administration of former Governor Adams Oshiomhole.

One of the pensioners, Godwin Egbon, said that whenever there is a salary increase, pensions should also be increased by the same percentage.

“Worst still, the ‘Comrade Governor’ Oshiomhole, a union man who ought to have corrected these ills, did not do it.”

The pensioners also alleged that the state government connived with some union members to withdraw one percent from their already lean pension as dues for their unions.

But the state government says it is caught in the crossfire between two opposing pensioner union members, insisting that is the main reason for the protest.

Special Adviser to the Governor on Media, Crusoe Osagie said the state government does not owe the pensioners a dime.

“There is supposed to be a statutory one percent deduction which they have not ironed out among themselves yet, so that is what is causing this crisis,” he said.

“The state government is caught in a cross-fire of disagreements within pension unions in the state. Whatever happened today with pensioners’ protest didn’t have anything to do with protests being owed because this state government does not owe a penny.”