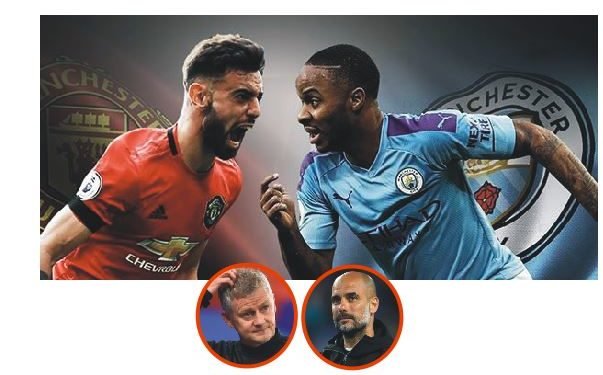 The 183rd Manchester derby takes place at Old Trafford this afternoon with United and City, separated by just a single point, both have a game in hand that could take them to within touching distance of the top of the Premier League.

But the league table is lying. Both City and United are badly underperforming – shadows of their best selves and, though taking very different approaches, suffering from a passivity and general clumsiness that suggests their tactical plans are in disarray.

Forget how bunched the top end of the table has become this season, United and City have won a combined 39 points from 20 games. That is nowhere near good enough.

Unsurprisingly, there is a lot riding on the first Manchester Derby of the season. Guardiola’s new contract means he will be given time to rebuild, limiting the impact of today’s game to this season alone, whereas Solskjaer is very much fighting for his job.

Manchester United will be looking to bounce back from Tuesday’s Champions League disappointment when they continue their Premier League campaign at home to Manchester City this weekend.

And yet Solskjaer’s team seem the more likely to win. Man Utd have won three of their last four meetings with Man City as the Norwegian’s typical big-game approach – sit back, absorb pressure, and counter – has caught City out.

There is every chance that will happen again this weekend, unless City can snap out of it; can up the tempo after a weary 2020.

There have been some classic encounters between these two teams in recent seasons and Ole Gunnar Solskjaer and United have had plenty of success over Manchester City and Pep Guardiola in recent outings, with wins in both of their PL games last season.

However, Man City have won more games away at Man United than any other team in Premier League history. And after the latest saga surrounding Paul Pogba and being dumped out of the Champions League, the pressure is piling on Solskjaer and a defeat in the Manchester derby will see that crank up plenty of notches.

Manchester United have a few injury concerns as Edinson Cavani and Anthony Martial were missing for the defeat at RB Leipzig in midweek. All eyes will be on Pogba to see if he starts after scoring in back-to-back games despite uncertainty over his future.

The biggest concern for Man City fans is that their team is looking even more passive – even more susceptible to being strangled by a low block – than they were last season.

Perhaps fatigue has taken its toll, because at the moment Guardiola seems incapable of inspiring a high press, which means the whole system falls apart, for three main reasons: his players are unable to win the ball in the opposition half and counter-press into space; their possession is stale and sideways, making it easy for a deep defence to nullify; and, when the opposition makes a tackle, they have room to get their head up and pick a long pass over the top of City’s high back line.

However, United are just as tentative, and for the most part play without shape, purpose, or direction. Solskjaer simply does not have the tactical ability to coach the team properly, which is why they so often fall flat in the first half of matches – most notably in each of their last three, against RB Leipzig, West Ham, and Southampton.

The Leipzig game was yet another example of why Solskjaer just isn’t up the job. United looked meek, easily overrun and outwitted by a more astute outfit who raced out of the blocks and seized the initiative in the face of United’s hesitancy. Man City have the ability – and, historically, the coaching – to do just that, pressing high and hard to swarm the visitors on Saturday.

This is Man City’s route to ending a poor record against their rivals: play with enough energy, and it is relatively easy to outfight and outthink Man Utd.

Manchester City boss Pep Guardiola has ruled out starting Sergio Aguero in today’s derby against United despite his goal-scoring return to action in the Champions League.

Aguero came off the bench to score City’s second goal as they wrapped up their Group C programme with a comfortable 3-0 win over Marseille.