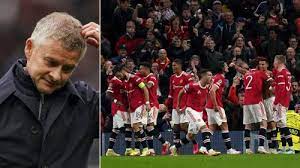 Manchester United have been rocked by a double selection blow with both Fred and Edinson Cavani set to be unavailable for the trip to Leicester City after the international break.

Fred and Cavani have jetted off to link up with Brazil and Uruguay respectively for the next fortnight.

The South American duo are even set to go head-to-head when their countries clash next Friday.

And with that fixture coming just 24 hours before United resume their Premier League campaign with a trip to Leicester, boss Ole Gunnar Solskjaer will be without the pair for the crunch clash.

It’s expected that the duo will feature in all three of their countries’ international fixtures over the next two weeks – leaving Solskjaer with a selection headache.

It could hardly come at a worse time for the Norwegian, with pressure beginning to mount on the Old Trafford chief.

United have won just one of their last four games, and a disappointing 1-1 draw with Everton before the international break has put Solskjaer on the backfoot.

Unfortunately for the beleaguered boss, things won’t get any easier after the break as United prepare to embark on a daunting run of fixtures.

Following the trip to Leicester, United face Liverpool, Tottenham and Manchester City in their next three Premier League fixtures, as well as Atalanta, who top Group F, home and away in the Champions League.

Whilst the Old Trafford hierarchy gave Solskjaer another public display of support by handing his assistant Mike Phelan a new long-term deal this week, a nightmare run of results could test their stance.

As well as being a blow to Solskjaer, Cavani’s absence for the Leicester clash will also disappoint the veteran striker, who is determined to muscle in on more first minutes.