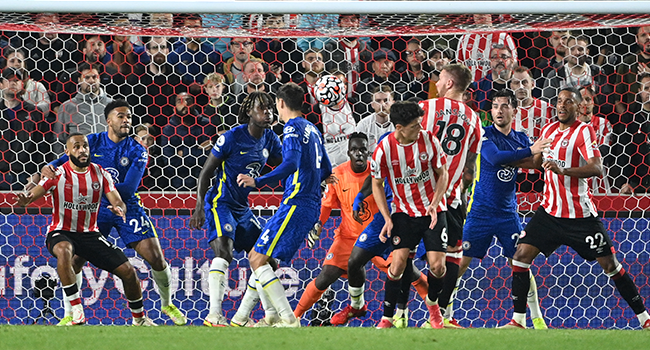 Tuchel’s side had been knocked out of pole position by Liverpool’s 5-0 rout of Watford a few hours earlier.

But Chelsea had the perfect response with a gritty victory in their first league meeting with their west London neighbours for 74 years.

Ben Chilwell’s fiercely-struck goal in first half stoppage-time was enough to give Chelsea their sixth win in eight league games.

But Chelsea had to rely on a series of fine saves from Mendy in the closing stages before they could move one point clear of second-placed Liverpool.

“They trouble you with long throws and set pieces. They created big chances and Mendy was the key to the clean sheet,” Tuchel said.

At the start of a five-game run of winnable league fixtures, Tuchel had warned his players not to expect an easy ride from Brentford and the Chelsea boss was proved right.

“We were very strong for 70 minutes and very lucky for 20 minutes, to sum it up,” Tuchel said.

“We escaped with the three points thanks to Edouard. It was like a cup game at the end; they took risks and the atmosphere gave them a lot of courage.

“It is better to be there at the top but there are way too many teams who are close.”

Just five months ago, the gulf between the clubs appeared huge as Chelsea won the Champions League on the day Brentford earned promotion to the top-flight for the first time since 1947.

However, Brentford had already bloodied the noses of two supposedly superior opponents this term, with Arsenal beaten at the Community Stadium and Liverpool held to a draw.

They pushed Chelsea to the brink as well with another spirited showing.

Romelu Lukaku was without a club goal in his last five games and the Belgium striker misfired with Chelsea’s first shot of the game, bending a free-kick well off target.

Brentford nearly snatched the lead when a set-piece caused havoc in the Chelsea defence and Bryan Mbeumo slammed his shot against the post.

Tuchel’s men weren’t at their most fluent as Brentford worked tirelessly to deny them time and space.

Timo Werner held his head in frustration after curling inches wide with a strike from the edge of the area after Lukaku teed up the German.

Chilwell finally broke Brentford’s stubborn resistance in the first minute of stoppage-time as the left-back extended his unexpected hot streak.

Cesar Azpilicueta’s cross towards Lukaku was only cleared to the edge of the area, where Chilwell was waiting to lash a superb strike high past Raya.

Chilwell’s second goal in his last two Chelsea games came after he also netted for England against Andorra during the recent international break.

The Blues had conceded just one goal from open play in the league this season and the stand-ins somehow held firm amid Brentford’s second half barrage.

Mendy had to make his first save in the 73rd minute when the Senegal keeper repelled Ivan Toney’s snap-shot.

Mbeumo almost grabbed a Brentford equaliser with a low drive that beat Mendy, only to cannon back off the post before Chelsea cleared the danger.

With Brentford pouring forward, Mendy had to save again from a Saman Ghoddos effort before Trevoh Chalobah cleared Christian Norgaard’s shot off the line.

Mendy made yet another great stop, diving at Pontus Jansson’s feet to keep out the Brentford captain’s close-range shot.

Inevitably, there was more work for Mendy to do in stoppage-time and he rose to the challenge with a brilliant tip-over from Norgaard’s overhead kick.