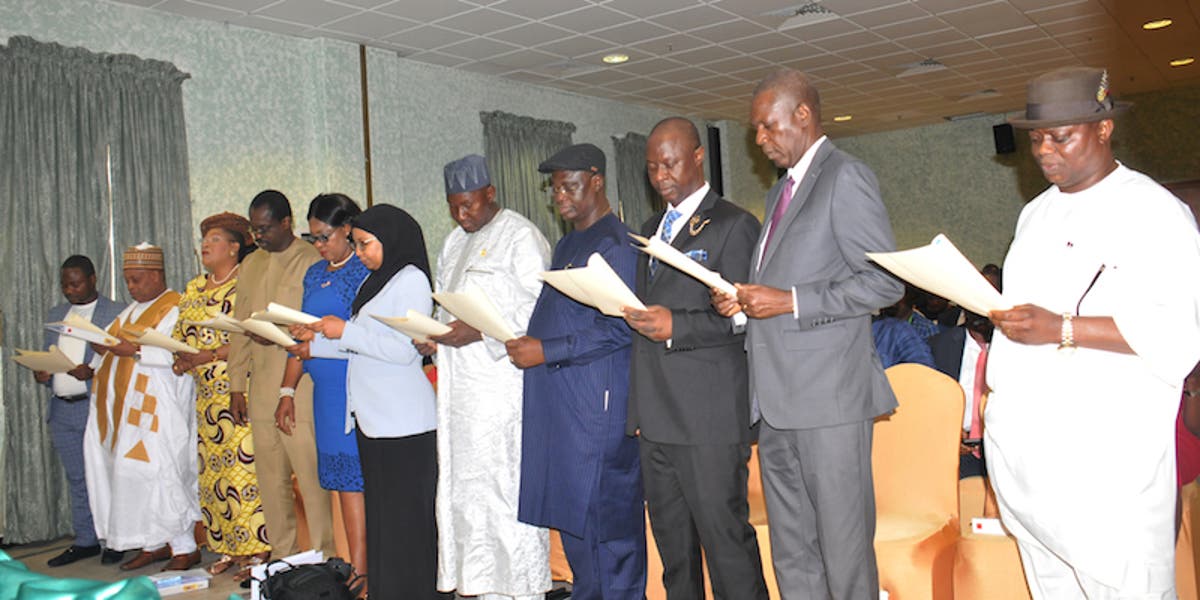 The Federal Government has inaugurated the new management team of the Nigeria Social Insurance Trust Fund (NSITF) with a charge to the officers to shun all forms of corrupt practices.

A Press Release signed by Charles Akpan, Deputy Director Press and Head of Public Relations says the event which was performed at the Banquet Hall of the Presidential Villa by the Honourable Minister of Labour and Employment , Sen. Chris Ngige had Dr. Michael Akabogu sworn in as the new Managing Director and chief Executive Officer, Mrs. Akinwale Caroline Temitope as the Executive Director Finance and Investment, Mrs. Mauren Allagoa, Executive Director Administration and Gana Mudu, Executive Director Operations.

Also sworn in as nominal directors are Mrs. Lauretta Adogu, Director, of the Department of Occupational Safety and Health, to represent Federal Ministry of Labour and Alhaji Najeem Yasin – Deputy President, Nigeria Labour Congress (NLC) to replace the late Khaleel Ibrahim who died in October 2020.

In his address at the occasion which also had in attendance the Honourable Minister of State , Labour , Festus Keyamo and Senior Special Assistant to the President on Niger Delta Affairs, Sen. Ita Enang, Senator Ngige said the era of corrupt ridden management at the NSITF was over.

He said, “it is important for me to draw the attention of the new management to the financial hemorrhage the NSITF has passed through in the last few years and the imperative of a new direction as contained in the directive of the President.

The NSITF must be revitalized and repositioned to fulfil its mandate in accordance with the establishing Act.

“The years of the Locust is now over. You can’t afford to take us back to Egypt. The era where N5b vanished in one day is gone for good .The era of looting of N48 billion without a single voucher is far gone.

“ This new management should not indulge in the sins of the past and must adhere to the statutory conditions of service and remunerations for Board Members approved by the Minister as enshrined in the NSITF Act.

“ Procurements must be done as contained in Procurement Act 2007 and Finance Act, Financial Regulation and the extant Government circulars especially on Threshold of Procurement items.

“Your performance will be measured every quarter and annually with the yearly reports and Audited Accounts to enable the Ministry do her own report to the President . Our measure as supervising Ministry is tied to your performance in terms of realization of your mandate and vision”.

Ngige added that the new management has one unique advantage which he called a defining shift from the past that will enable them effectively tackle challenges .

This paradigm shift in structural composition must meet the huge expectations of positive shift in goal delivery,” he charged them.

He further exhorted them, “ on your shoulders lies the burden of untying this organization from the tethers of stagnation. We must live down the past and lead a rewarding change in the fortunes of the NSITF in line with the directive of Mr. President and the establishing Employee Compensation Act of 2010.”

He further commended the interim management which piloted the affairs of the organization in the last eleven months and noted that it recorded an increase of about N7b in revenue contributions compared to the previous year.

Recall that on July 1st 2020, the President approved the suspension of the former Managing Director, three Executive Directors and nine other senior management officers of the Nigeria Social Insurance Trust fund(NSITF) from office, following established prima facie infractions on extant financial Regulations and Procurement Act, and other acts of gross misconduct.

According to the Minister, the President equally approved the setting up of a Presidential Joint Board and Audit Investigation Panel to probe affected officers.

“The Panel sat, long completed its assignment, and made far reaching recommendations among which is the removal from office of the managing director, three executive directors and nine other senior officers and the appointment of replacements, the inauguration of which takes place today.”

He frowned at the conduct of the Bureau of Public Procurement, especially its non-cooperation with the Presidential Joint Board and Audit Investigation Panel, noting that such attitude does not promote transparency and battle on corruption.

SignatureTV News Update - COAS: Nigeria will win the war against insecurity if troops are motivated