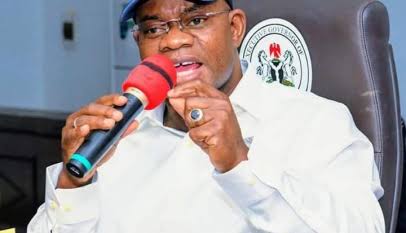 Kogi State Governor, Yahaya Bello, says Nigeria will be a safe place to live in when politicians stop the use of thugs and criminals during elections.

“When politicians begin to stop the use of thugs, touts or some group of criminals, that is when we will begin to have safety and security in our land,” the governor said on Wednesday, adding that thugs, who were used and dumped by politicians during elections metamorphosed into “hydra-headed monster” and criminal elements who now terrorize Nigerians.

Bello also said contrary to what is in the public space, he won the November 16, 2019 Governorship Poll without the use of ‘boys’ or thugs.

The governor, who was re-elected last year on the platform of the All Progressives Congress, said political thuggery was the norm in Kogi before he came into power but he “refused to play that kind of dangerous or unnecessary politics” when he came on board as governor of the North Central state.

The governor said when I came on board, I inherited a state that was largely divided along several lines. For you to aspire to be anything politically in Kogi State then, you must have what we call ‘boys’ or thugs or touts and then use it to intimidate people during political dispensations.

“Once the political exercise is over, the so-called boys or thugs or foot soldiers would be abandoned and then left to themselves and by that, they breed into something else or a hydra-headed monster that you will not be able to curb at the end of the day. There are several history and intelligence to that across the country.

“But I refused to play that kind of dangerous or unnecessary politics when I came on board. My ascension to office is known to everybody in the world. I chose my path immediately and decided to deal with criminals irrespective of political affiliations by using the laws passed by the Kogi State House of Assembly and the existing security architecture.”

Electoral observers have said the November 16, 2019 Kogi State Governorship Election was marred with violence and bloodshed.

It was reported that Acheju Abuh, who was the Women Leader for the campaign organisation of the Peoples Democratic Party governorship candidate, Musa Wada, was burnt alive in her home by suspected thugs during the election.

The United States Government subsequently imposed a visa restriction on some individuals for their actions during the November 2019 Kogi State elections.

But speaking on Wednesday, Bello, who had since described the US visa ban as unjust and unacceptable, stated that he won his re-election without the deployment of political thugs.

He said, “I won my election free and square. The police, the DSS, the military and all law enforcement agencies have their facts. Don’t listen to the things they peddle out there. When I see those things, I simply laugh and say how I wished they come to Kogi State to see for themselves.

“There was no time in my campaign that any of my followers goes into the destruction of billboards, signposts or installations of the state government, before, during and after the election.”

He further said the killers of the PDP women leader would be brought to justice.

“Some persons might allude to the unfortunate incident that led to the death of the PDP women leader in one of the local governments. Investigations are still on and I have promised that I am going to prosecute that case to the letter to prove who I am. The information out there are completely false,” the governor stated.