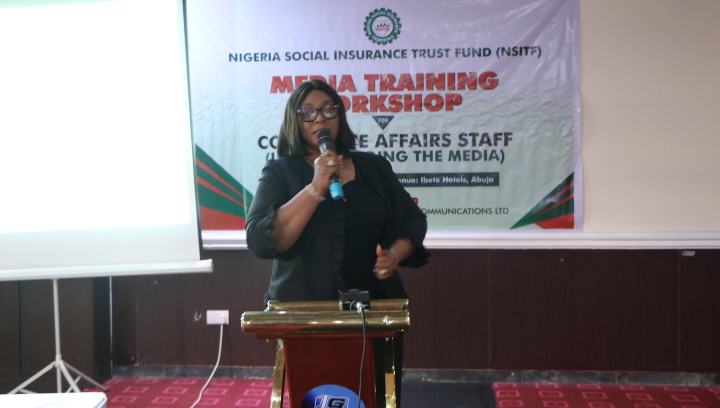 Okoronkwo, emphasized the need for the repositioning of the commission in the eyes of the public.

Okoronkwo further said that NSITF had suffered an image crisis in the recent past and there was an urgent need to change the narrative.

According to her in order to achieve the vision and mission of the NSITF the corporate objectives of the Fund must be re-enginered.

The Chief Executive Officer (CEO) Signature Communications Limited, VinMartin Obiora Ilo while delivering his lecture entitled “Why Strategy Matters in Communication” said that in order to put the NSITF in positive light the commission must be strategic and intentional in putting together a communications plan.
He said such a plan must have the buy-in of staff of the Fund across all levels of the organization.

Speaking on the topic Stakeholders Engagement: Government Relations and Public Affairs, the Executive Secretary Nigerian Extractive Industries Transparency Initiative (NEITI), Orji Ogbonnaya Orji, stressed the importance of proper stakeholders engagement as a tool for putting out the right message to the target audience and ensuring that such message is received and understood without interference

The seminar which was organized by Liraph in conjunction with Signature Communications LTD
was to build the capacity of corporate affairs officers of the fund in understanding and engaging the media in the most strategic and effective ways to acheive desired results for the NSITF.