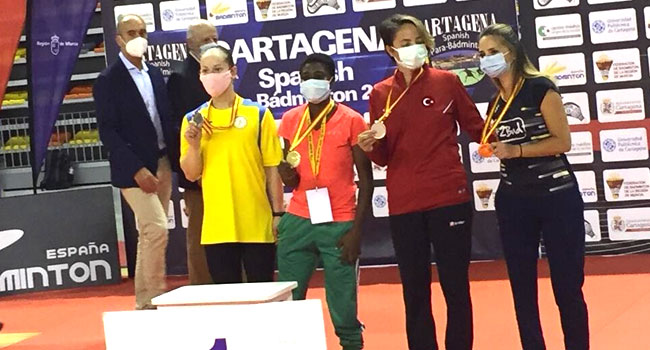 Nigeria’s Eniola Bolaji has made history as the first African to reach the final and win gold at a major para badminton international championship.

Bolaji achieved the feat by beating Ukraine’s Oksana Kozyna 18-21, 21-14, 21-18 at the 2021 Spanish Para Badminton International Championship which ended on Sunday in Cartegena.

With the victory, Bolaji has also qualified for the World Para Badminton Championship scheduled to hold in October in Japan.

At the medal presentation ceremony, a minute of applause was held to remember coach/player, Bello Oyebanji, who died in a ghastly accident while trying to secure his visa for the tournament.

The late Oyebanji discovered, trained, and mentored the new Spanish international champion before he met his untimely death.

According to the President of the Badminton Federation of Nigeria, Frank Orbih, Bolaji’s victory is just a taste of the great prospect of para badminton in the country if given the necessary support and attention.

“History was made today in African and Nigerian para badminton with this record-breaking and setting performance by Eniola Bolaji,” he said.

Orbih, “She has become the first Nigerian and African to get to the finals and go on to win a gold medal in any para badminton international championship. It is a huge consolation for the badminton family that Coach Bello Oyebanji did not die in vain.

“It is a very emotional one for us. It shows that with consistency and resilience, the results will always come; she played in an international tournament for the first time with a great and amazing performance of winning gold in the Single SL3 event and qualifying for the World Para Badminton championship in Japan come October.”