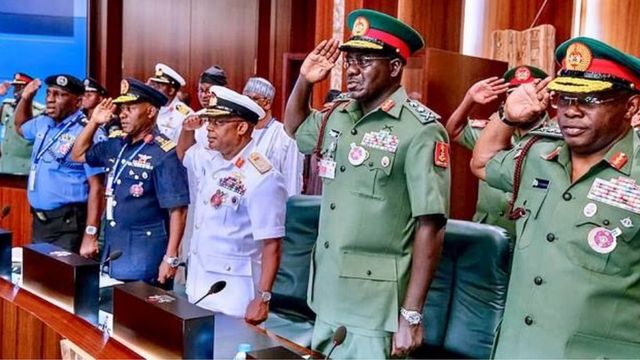 The Coalition of Northern Groups says it is dragging the President Muhammadu Buhari (retd.), to court over the continued retention of the nation’s service chiefs.

There have been calls for their removal for non-performance, but a spokesman for the President, Mr Garba Shehu, had consistently argued that only Buhari could hire and fire the service chiefs.

However, the CNG disagreed, saying that the service chiefs have overstayed.

The coalition added that under them, the security situation in the North had worsened, hence the need for the court to compel Buhari to remove them (service chiefs).

The CNG argued that there were laws guiding the appointments of the service chiefs, which must be followed to evolve the system.

This, the northern organisation said, would be explored when they get to the court.

CNG’s spokesperson, Abdul-Azeez Suleiman, stated these in an exclusive chat in Kaduna.

Suleiman said, “The CNG is going to court because we believe it is now no longer a question of performance, but one of legality on whether the service chiefs, who have overstayed their years of service should not be compelled to comply with the laws guiding the prevailing scheme of service in the country.

“We would seek interpretation from the courts on the applicability of the law that says if a public servant attains 60 years of age, he must retire, or if he covers 35-years in service, he should go.

“On moral grounds, CNG regrets that by any standard of judgement, President Muhammadu Buhari and his security chiefs as constituted today have failed the nation in the vital area of improving its security.

“We at the CNG have been consistent with our warnings that President Buhari lacked the will, his overstayed service chiefs lack the capacity, competence and commitment to lead Nigeria into a secure and prosperous future.

“It is shocking that in spite of unprecedented consensus among Nigerians that the administration requires a new resolve, approach and leadership in the fight against the nation’s multiple security challenges, President Buhari appears either totally isolated or in deep denial over the result of his service chiefs’ failures to secure Nigerians.”