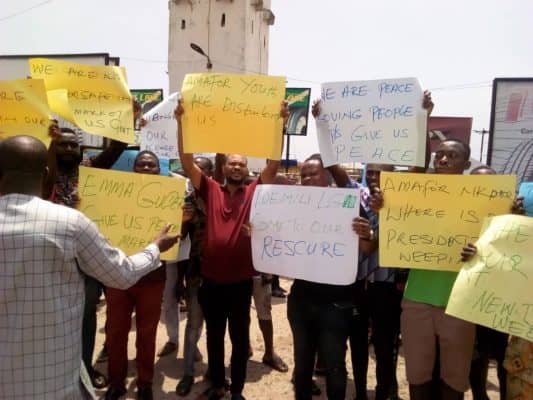 Angry traders at the Nkpor market in Anambra state on Wednesday blocked the Onitsha-Enugu express to protest the disappearance of their chairman Okey Atuenyi.

The traders who carried placards with various inscriptions alleged that some youths from Amafor village had confronted Okey Atuenyi last Friday after he had closed from work and beat him up.

Atuenyi had organised the tyre dealers to resist illegal tax collection, touting and extortion, a common practice the new government in Anambra state had banned.

The former chairman of the trade union who addressed the angry members said that Amafor youths have violently been and forcefully collecting illegal levies from the traders.

He said on Friday, the youths who were angered by the move to end illegal collections had beaten the Missing chairman, took away his phones and collected an unspecified amount of money which he had on him.

The former chairman pleaded with the traders not to take laws into their hands while pleading with the Anambra state government to intervene and restore peace to the market.

Speaking to SIGNATURETV, the public relations officer of the traders union, Stanley Okpala, described the disappearance of the Union chairman as a sad development. He called on the Anambra state government to ensure the safe return of the missing chairman.

Other members of the Union, including Afamefuna Ezechi and Frank Ofojebe, said the Amafor youths riding on motorcycles harass and extort traders and make buying and selling a nightmare for traders and their customers.

They called on the government to put an end to the illegal levies and bring sanity to the market.

The Police Command in Katsina State on