HomeNEWSOgun traders protest as govt replaces over 3,000 razed shops with 188 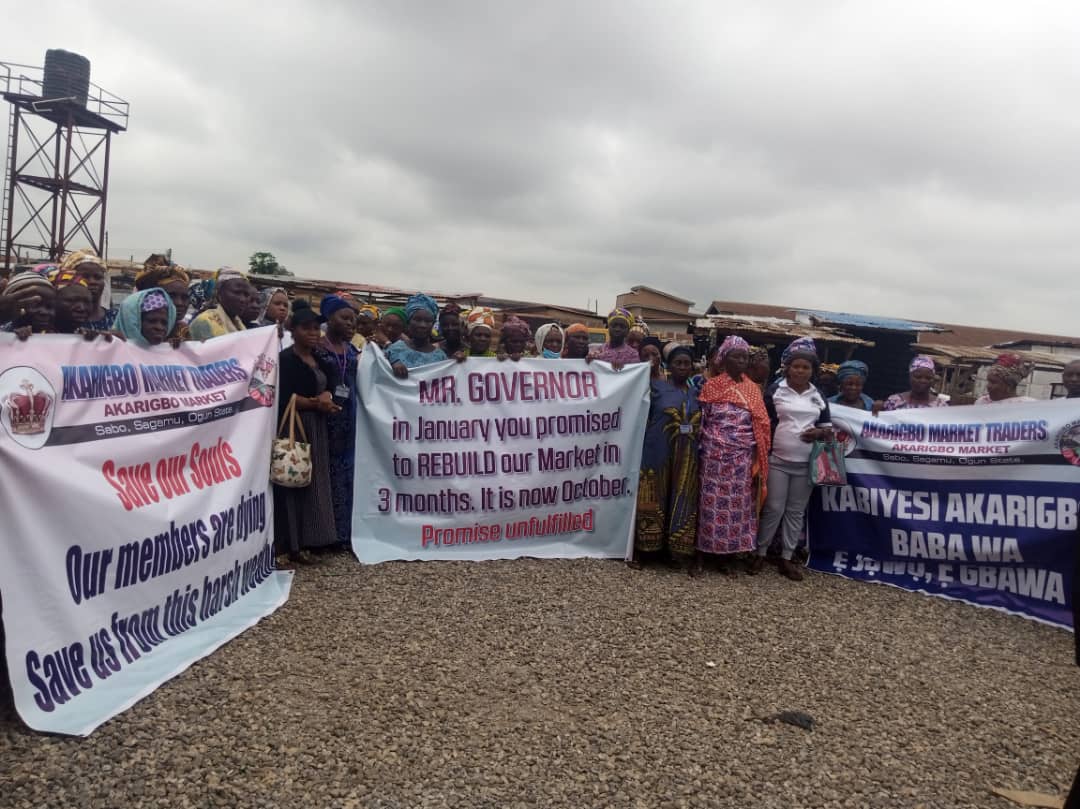 Scores of traders at the popular Sabo Market in Sagamu, Sagamu Local Government of Ogun State on Thursday took to the street to protest the paltry number of shops built by the state government to replace the 3,000 units of shops razed by fire in January, 2020.

At the protest, the market women said Governor Dapo Abiodun had promised to reconstruct the razed shops, but they expressed shock when it was discovered that the government only built 188 shops in place of the 3,000 lost to the fire.

In a peaceful demonstration, the women had thronged the palace of the Akarigbo and Paramount Ruler of Remoland, Oba Babatunde Ajayi, to register their displeasure.

It could be recalled that the January 2020 fire incident consumed properties worth millions of Naira, as residents suspected it could have been triggered by a power surge.

After the incident, Gov Abiodun visited the scene for on-the-spot assessment, with a promise to look into the design of the market and as well as reconstruct same.

But, the traders who stormed the streets of Sagamu, said they were disappointed in what the government provided in place of the many shops burnt; they sang solidarity songs, causing traffic gridlock for hours on the popular Akarigbo street.

They were armed with placards with various inscriptions such as ; “Save Our Souls”, “Our members are dying”, “Save us from this harsh weather”, “Mr Governor, in January you promised to rebuild our Market in 3 months. It is now October” among others.

The traders, who are mostly women said over 3,000 open stores and lock up shops were destroyed by the fire, wondering how they would manage the few 188 constructed by the Abiodun government.

Speaking on behalf of the protesters, the Secretary of Sabo Market, Abdulrahaman Ojuolape, said the traders were not satisfied with the reconstruction, saying “we are in dilemma on how to allocate 188 shops to over 3,000 beneficiaries.”

Ojuolape threatened that the traders would vote against the second term ambition of the Gov Abiodun if nothing was done to yield to their demands.

He added,”By this time next year, they will start campaigns. We want him to come and do this for us as early as possible because he would vie for his second term.

“We are the electorates, we put him in that office, it is not by their power. If he fails to do this for us, we will change our minds.”

Another trader, Kemi Ogunowo, stated that there was a need for the government to ensure all shops razed by fire and as well demolished were reconstructed to give all traders a sense of belonging.

Ogunowo lamented that the 188 shops reconstructed out of 3,000 were “grossly inadequate.”

She said, “The government has only reconstructed 188 shops, while we lost more than 3,000 shops to the inferno.

“If they should allocate the 188 shops, a large number of traders would be shortchanged and that could lead to crisis. We are begging the governor to help rebuild the remaining shops before it is too late.”

In his reaction, Sagamu Local Government Chairman, Afolabi Odulate, said forms will be out on Monday for the allocation of the shops and stalls.

Odulate assured that the reconstructed stalls and shops will be allocated to only traders at the market.

He, however, revealed that plans are underway by the Local Government to continue the reconstruction of the market so as to accommodate more traders.

“There is a process to everything and I have been trying to explain things to them. No one is going to take the shops away from them, they belong to them. Once, they paid for it, it belongs to them; we are not giving them out to people who don’t have shops in the market.

“We know it is not enough, I personally took it upon myself to go to Abeokuta to speak with the commissioner that the State should release it to Local Government to do the completion of the rest and he agreed. We are packaging our proposal, which I will take to Abeokuta on Monday, they should please be calm,” the council Chairman explained.