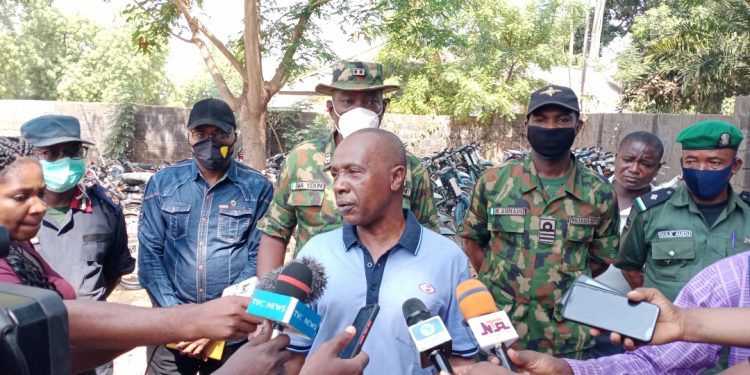 The Benue State Government on Saturday received 78 motorcycles that were impounded in Ukum and Katsina-Ala local government area by troops of Operation Whirl Stroke (OPWS).

It would be recalled that the state government had placed a ban on the use of motorcycles in the Sankera axis following an increasing spate of violence in the area in recent times.

Security Adviser, Lt. Col. Paul Hemba (rtd) while receiving the seized motorcycles from the Commander of OPWS, Maj. Gen. Adeyemi Yekini disclosed that they were part of motorcycles impounded from those who flouted government order in the area.

“You are here to witness the hand over of seized motorcycles from Katsina-Ala and Ukum. 78 motorcycles were handed over to the state government by Commander OPWS. They are part of motorcycles arrested from Sankera axis.

Hemba noted the state security council took the decision to ban motorcycles in the Sankera axis as a result of the increasing spate of criminal activities in the area.

“As we are all aware, motorcycles are a major source of criminial activities across the country. That was why the security council arrived at the decision after x-raying the activities of bandits in the area which culminated in the recent attack on the council chairman of Katsina-Ala.

“Some of the impounded motorcycles belong to bandits while some also belong to other people who flouted the ban order of the state government.

Asked about allegation of burning of impounded motorcycles by the military, the Security Adviser said the allegation might be isolated incidence and could be propaganda by bandits to discredit OPWS.

He said traditional rulers and other stakeholders in the area have appealed to the state government for ladies machines to be excluded adding that the security council will meet to ratify the appeal soon.

Nwaogu pulls out of Ohanaeze election