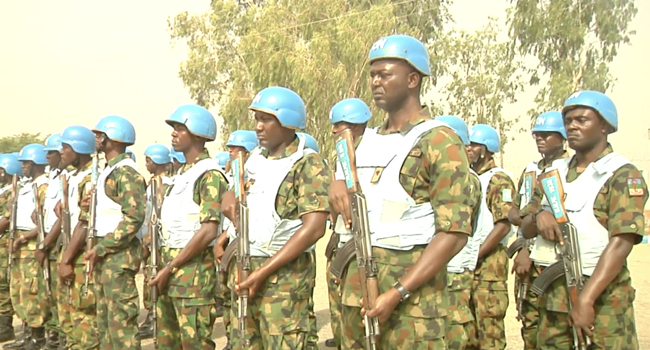 Nigerian Army has deployed 62 soldiers and officers to Mali on a peacekeeping mission.

The Army Deputy Chief of Training, Brigadier General Hassan Dada announced this on Friday at the passing out parade of the troops from the General Martin Luther Agwai Peacekeeping Centre in Jaji,  Kaduna state.

The passing out ceremony comes ahead of their departure to Bamako, the capital of Mali, as they are expected to depart Nigeria immediately after their induction.

General Dada warns the troops that the Nigerian Army will not tolerate any act of cowardice or professional misconduct from them during the operation in the West African country.

He also advised the contingent to abide by the rules of engagement, exhibit braveness as professionals, and also respect the cultural sensitivity of the people of Mali.

The soldiers and officers of the Nigerian Army had undergone intensive military training at the General Martin Luther Agwai Peacekeeping Centre in Jaji, Kaduna ahead of their departure to Mali on a peacekeeping mission

They were subjected to three weeks of special intensive training, and the completion of the Pre-Deployment Training qualifies them to be deployed in the United Nations Multi-dimensional Integrated Stabilization Mission in Mali (MINUSMA).

Ahead of their departure, the Army Deputy Chief of Training, Brigadier General Hassan Dada, reminded the troops of the United Nations zero-tolerance for drug trafficking and human rights abuse.

He also asked them to avoid indecent characters capable of tarnishing the image of the Nigerian Army and the nation in general.

The Commandant of the Martin Luther Agwai Peacekeeping Centre, Major General Auwal Fagge, is also confident that the high level of enthusiasm and cohesion exhibited by the soldiers and officers will reflect on their operational conduct while in Mali.

“I hope this will reflect positively on the conduct of the unit in the theatre of operation in Mali,” he said.

Mali is a West African Country that has been facing serious political, security, socio-economic, humanitarian and human rights challenges after a coalition of Tuareg and other terrorist groups attacked and captured some territories in the country in January 2012.

This situation led to the deployment of AU and French forces which later transformed into the UN Multi-dimensional Integrated Stabilization Mission in Mali (MINUSMA) with a Security Council mandate which includes the protection of civilians.

Since, the inception of the UN mission, Nigeria has been deploying a Level II Hospital in the Timbuktu region of Mali.