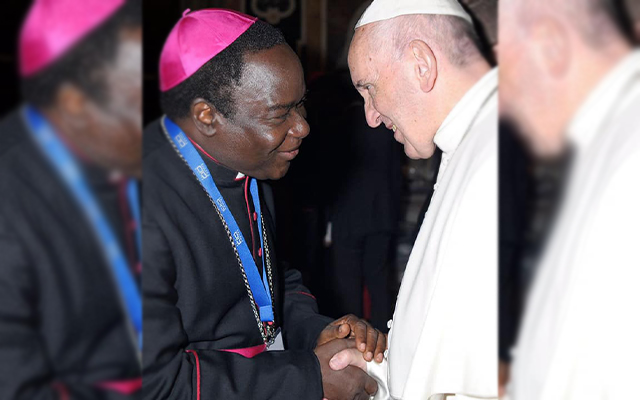 Catholic pontiff, Pope Francis, has appointed, Matthew Hassan Kukah, Bishop of the Diocese of Sokoto as a member of the Dicastery for the promotion of human integral development.

Kukah joins the Dicastery on the promotion of integral development with a lot of experience in the area of human rights, justice and reconciliation.
He is expected to team up with other members drawn from different regions of the world to advise and promote the Holy Father’s concerns on issues of justice and peace, human rights, torture, human trafficking, care of creation, and other issues related to the promotion of human dignity and development.

Director, Social Communications, Catholic Diocese of Sokoto, Rev. Fr. Christopher Omotosho, in a statement, said the appointment was contained in a letter to Bishop Kukah signed by His Eminence, Peter Cardinal Turkson, Prefect of the Dicastery.

He said the appointment adds to Bishop Kukah’s string of national and international engagements within the universal church, explaining that the appointment which is renewable, is for an initial period of five years, adding that the council would be formally inaugurated on a later date.
Bishop Kukah has first appointed a Consultor and later a member of the Pontifical Council for Inter-Religious Dialogue, Vatican City and served under three Popes.

Meanwhile, President North Central Muslim Peace Initiative, Alhaji Saleh Zazzaga, has called for restrain in the inflammatory rhetoric in various quarters and on social media in reaction to the Christmas message by Bishop Kukah.

Zazzaga, who spoke to Journalists in Jos said Kukah for long has been speaking to address the ills in the nation, and that it is improper for any person or group of persons to give it an ethno-religious connotation because it has the tendency to trigger violence in the country.

He said he has read an ultimatum given to Kukah by a group in Sokoto to apologize or leave the state and the several reactions that followed the ultimatum in the social media and several quarters, saying that such happenings is not healthy for the nation and will divide the citizenry than unite them.

The President said it is the authority/government that will determine if a message/comment can be classified as hate speech or otherwise and not a group of persons.

Zazzaga said several persons irrespective of their religious or ethnic background had made comments in the interest of the nation, but that he didn’t know why Kukah’s remarks was generating unnecessary controversy.

He called the government at all levels to establish and maintain a close relationship with clergy men and constructive critics like Bishop Kukah, across all religions, so that they can keep sharing ideas and getting good counsel where necessary.