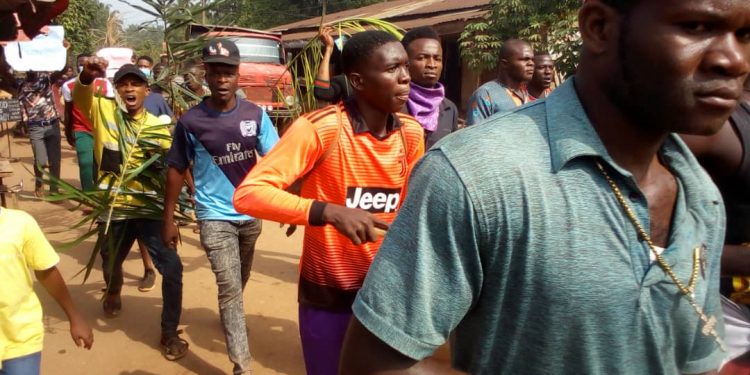 Baring any other intervention, by Monday, the Umuona community in Aguata local government area of Anambra State would be turned into a ghost town following concluded arrangements by the youths of the area to disrupt the scheduled election of the President-General of the community.

Already the Anambra State High Court presided over by Hon Justice M.N .O Okonkwo was said to have stopped the traditional ruler of the community, Igwe Humphrey Ejesieme from disqualifying candidates for the said election ordering him to allow all taxable adults in the area to vote in the forthcoming election.

Over three thousand youths, yesterday, protested at the market square and around the eight villages that make up Umuona warning that the traditional ruler should cancel all levies, fines and all manner of extortion and also allow them to take part in the electoral process or hell would be let loose.

Speaking with reporters in Umuona the youths leader, Mr Chukwudi Obiora alleged that the traditional ruler had concluded arrangements to disenfranchise them even when the community’s constitution and the constitution of the Federal Republic of Nigerian had stipulated that the minimum age for voting was eighteen years and above.

“We are the youths of Umuona and I organized them to embark on this protest against our traditional ruler who recently announced that the youths who are already eighteen years and above should not be allowed to vote in the election, ” the youths leader said.

Another spokesman for the youths, Mr Chukwujekwu Okanume alleged that a lot of people in the community were being mandated to pay huge sums of money as fines lavies and all manner of taxes by the traditional ruler before participating in the election.

The Awka High Court was said to have ordered the traditional ruler and the electoral body to ensure that no Umuona adult was disenfranchised on the day of the election or face contempt charges.

When contacted the traditional ruler Igwe Humphrey Ejesieme said that he was not denying any adult the right to vote but insisted that all qualified voter in the community that was owing must clear their debts before voting.

Ejesieme accused some people he described as detractors of sponsoring the youths against his throne, adding that since he became the traditional ruler they had not paid him homage.

“I am not against the election or against the youths only that those who are owing lavies, taxes, and fines must clear their depts before voting.

Meanwhile, apprehension can best describe the mood in Umuna town as some villagers have started fleeing their homes for fear of being caught up by the crisis.