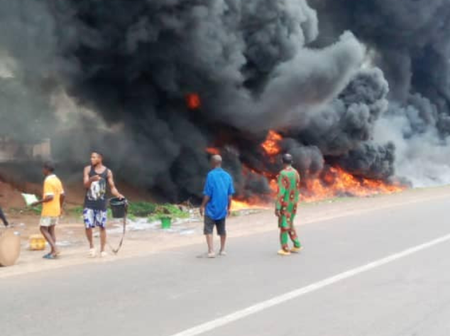 A tanker loaded with products suspected to be Premium Motor Spirit, popularly known as petrol, crashed on the Mararaba-Abuja expressway on Tuesday morning.

The product spilled from the crashed tanker, flowing uncontrollably into nearby shops and residential areas which threw residents into confusion as they evacuated their belongings for fear of unforeseen fire outbreak as a result of the oil spill and ran for safety.

An eyewitness, Hassan Abdulkareem, while explaining that the tanker lost control in an attempt to avoid a pothole on the highway at the popular Mopol Junction in Nyanya, a suburb in the Federal Capital Territory, stated that as a result of the accident, some hoodlums had taken advantage to loot items from the deserted shops.

According to him, the unfortunate incident also led to the barricade of the highway by men of the security forces, while men of the fire service from Karu and Abuja were already on the ground to forestall any outcome.

Insecurity: Service Chiefs To Appear Before Senate On Thursday