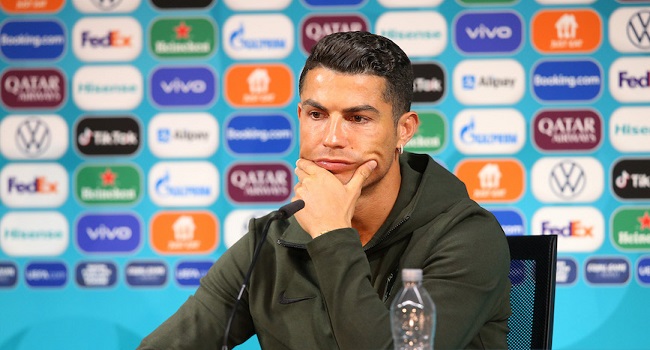 When Cristiano Ronaldo and Paul Pogba removed Coca-Cola and Heineken bottles during Euro 2020 press conferences, it showed sports stars are rejecting sponsors’ products that fail to correspond to their personal values, analysts say.

Ronaldo has a combined social media audience of around 500 million followers, so when he speaks, it has an impact.

The 36-year-old Portugal captain is a fitness fanatic and made clear what he thought of the Coca-Cola bottle set out in front of him as he spoke to the media on Monday before his country’s opening match against Hungary.

He shifted the bottle out of sight of the cameras before saying in Portuguese: “Agua!”, appearing to encourage people to opt for the natural choice instead.

Ronaldo went on to score twice in the 3-0 win against Hungary to become the all-time top scorer in European Championship history.

The next day France midfielder Paul Pogba, who is Muslim and does not drink alcohol, made a similar gesture by removing a bottle of Heineken beer during his press conference. The fact that it was a non-alcoholic version did nothing to lessen the message.

“We’re in a new era where athletes seem to be reclaiming their voice. They seem to reserve the right now to speak and behave in ways that are consistent with what they think, what they feel, what their values are,” said Professor Simon Chadwick, the director of the Centre for the Eurasian Sport Industry at Emlyon Business School in France.

Ronaldo has been happy to endorse sugary soft drinks in the past — in fact he did promotional work for Coca-Cola in China in the mid-2000s and has worked for their rivals Pepsi.

But Chadwick said the Portuguese superstar was saying, very publicly: “As an individual, I have the personal right to move on from whatever I did in the past.

The reach of social media gives such protests more power than ever before.

“I call it side-swipe activism,” Chadwick said. “Whether you are online or you are in the physical world, if there is something in front of you that you don’t like or isn’t aligned with your own values, you just move it out of the way.”

Some reports suggested Ronaldo’s gesture caused Coca-Cola’s share price to fall by $4 billion at one point, but many analysts said the footballer might not have been responsible.

Gregori Volokhine, President of Meeschaert Financial Services in New York, said the drinks giant’s shares finished 0.25 percent down, in line with the overall dip in the Dow Jones that day.

“With a market value of $235 billion, that corresponds to just over $500 million. We wouldn’t even have noticed if there hadn’t been this controversy,” Volokhine said.

So what is the impact for brands when top sports stars reject the products of the sponsors who pay tens of millions of dollars to be associated with an event such as Euro 2020?

“It is too early to say,” said Bertrand Chovet, head of Brand Finance France.

“Product placement could, though, be more nuanced these days. But the players benefit from these sponsors so they are acting in a slightly contradictory way.”

Coca-Cola and Heineken did not respond to requests for comment, but UEFA’s tournament director Martin Kallen said: “The revenues of the sponsors are important for the tournament and for European football.”

Chadwick believes such protests are a serious headache for sponsors.

“This poses a big challenge because the two extremes are probably the only way forward for sponsors. Either you take away all the logos or you vigorously enforce the contractual rights associated with a sponsorship deal,” he said.

Next Kaduna Governor will demolish more houses than me — El-Rufai