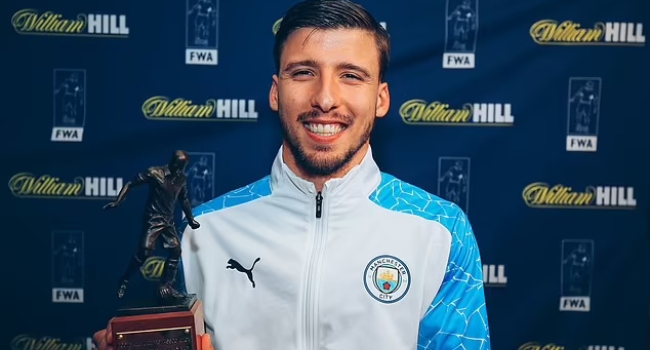 Manchester City defender, Ruben Dias, has won the English Premier League ‘Player of the Season’ award for the 2020/21 football season.

The 24-year-old Portuguese centre back won the prestigious award in his debut season at the Etihad side, after helping coach Pep Guardiola win the Premier League, Carabao Cup, and to reach the Champions League final.

The award given to Ruben Dias was decided by a combination of public votes with those of 20 club captains and a panel of football experts.

Since joining The Cityzens from Benfica in 2020 for a record fee of £65 million, Dias has formed a formidable partnership with co-defender John Stones, which saw him make 32 league appearances for Man. City, scoring a goal, wins in 23 games, and keep 15 clean sheets.

His stellar performance for the Manchester side helped City enjoy a 21-game winning streak in all competitions, including 15 successive triumphs in the Premier League, while conceding only 32 goals in total in the EPL.

This is Dias’ second individual laurel this season, as he’d won the Football Writers’ Association award in May, beating his City team-mate Kevin De Bruyne and Hotspur’s Harry Kane.

Dias is the fourth defender to win the award; the others are Nemanja Vidic, former City captain Vincent Kompany and Virgil Van Dijk.

He is also the second Portuguese to claim the prize after Cristiano Ronaldo won it twice — in the 2006/07 and 2007/08 seasons — during his stint at Manchester United.