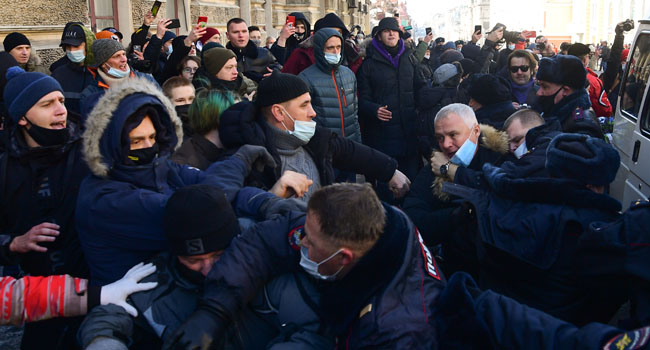 Russian police detained dozens of protesters on Saturday as supporters of jailed Kremlin critic Alexei Navalny took to the streets following his call to protest against President Vladimir Putin’s rule.

Putin’s most vocal domestic critic called for mass rallies after surviving a near-fatal poisoning with a Novichok nerve agent and returning to Moscow last weekend following months of treatment in Germany. He was arrested at Sheremetyevo Airport and jailed.

The rallies — planned for dozens of cities across Russia — are expected to be a major test of the opposition’s ability to mobilise despite the increasing Kremlin pressure on critics and the coronavirus pandemic.

The first protests took place in the Far East and Siberia including Vladivostok, Khabarovsk and Chita where several thousand took to the streets, Navalny supporters said.

OVD Info, which monitors detentions at opposition rallies, said around 50 people were detained in 10 cities.

In Moscow, which usually mobilises the largest rallies, protesters plan to meet in the central Pushkin Square at 2:00 pm (1100 GMT) and then march towards the Kremlin.

On the eve of the rallies, Navalny, who is being held in Moscow’s high-security Matrosskaya Tishina jail, thanked his supporters.

“I know perfectly well that there are lots of good people outside of my prison’s walls and help will come,” he said on Friday.

Navalny’s wife Yulia said she would join the protest in Moscow. “For myself, for him, for our children, for the values and the ideals that we share,” she said on Instagram.

Ahead of the demonstrations several key Navalny aides were taken into police custody for violating protest laws and handed short jail sentences to keep them away from the rallies.

The Investigative Committee, which probes major crimes, said Friday it launched a criminal probe into the calls for unauthorised protests.

A hastily organised court on Monday jailed Navalny for 30 days, and his supporters fear that authorities are preparing to sentence him to a long prison term to silence him.

The “Putin’s palace” report alleges the Russian leader owns a 17,691 square metre mansion that sits on a property 39 times the size of Monaco and features a casino along with a theatre and a hookah lounge complete with a pole-dancing stage.

The two-hour video report had been viewed more than 65 million times since Tuesday, becoming the Kremlin critic’s most-watched YouTube investigation.

The Kremlin has denied the property belongs to Putin.