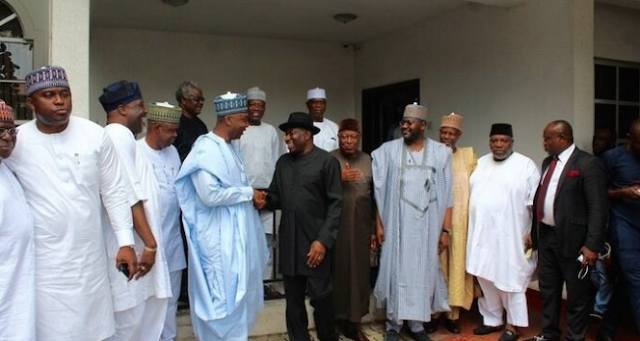 Speaking on Tuesday after he led the reconciliation and strategy committee of the party to Jonathan’s residence in Abuja, Saraki said the committee members had briefed the former president of their mandate and plan to strengthen the party.

The committee was set up in 2019 to resolve the internal crisis within the PDP and reconcile aggrieved members.

Saraki said those disturbing Jonathan to defect to another party should forget the thought, saying the former president remains a PDP man.

“He gave us his views and we are very happy. He reassured all of us of his commitment to the PDP and he told us that he is still ready to offer his time, experience and resources to strengthen the party,” Saraki said.

“That is very strong and important for us. Of course, you know there are funny issues going on but we are leaving this place very happy.

“He is also ready to work with the reconciliation committee to play his own part. That is a great step for the party.

“We spoke about what role former presidents like him will play and he left us feeling very happy that yes, he will like to play that role in the PDP and help our committee to move forward.

“That is a great step for the party. We have put that behind us all those people of the other party that would like to come and disturb our leaders. Our leaders are here and they are ready to work for the party.”

Others were Mulikat Adeola-Akande, former leader of the house of representatives.