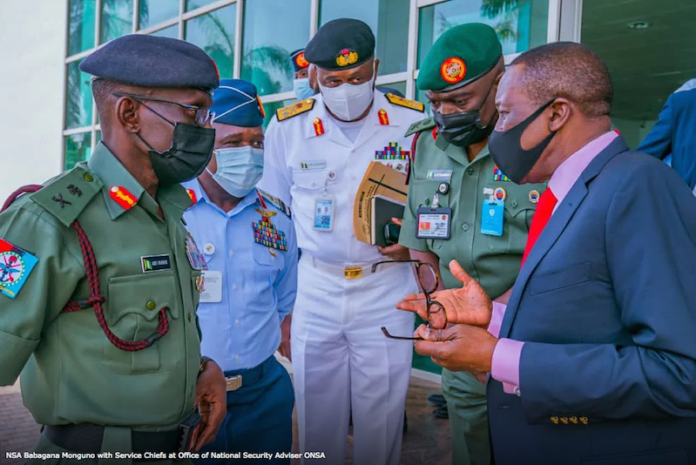 A joint operation to deliberately deny criminals room for manoeuvre and change of locations and hideouts has been approved by a forum of prominent state players as part of a new initiative to curb the growing insecurity in the country. Key actors, who endorsed the move, include Secretary to the Government of the Federation (SGF), Boss Mustapha; National Security Adviser (NSA) Babagana Monguno; and Inspector General of Police Mohammed Adamu. Minister of Humanitarian Affairs, Disaster Management and Social Development (FMHADM&SD), Sadiya Umar Farouk; Minister of Environment, Dr. Abubakar Mahmood; and the 36 Secretaries to the State Governments also approved the new operation.

The resolution was part of the decisions reached at the first quarter regular meetings by the Forum of Secretary to the Government of the Federation with Secretaries to the State Governments, which held virtually on Thursday.

According to a communiqué issued yesterday, the meeting urged the Secretaries to the State Governments to explore possibilities of joint operations by states to prevent free movements by criminals between states.
“This is to avoid bandits moving from areas of hot pursuit to other areas and returning, when the heat is down,” the communiqué stated.
Themed, “Role of Secretaries to the State Governments in Strengthening Sub-National Level Security Architecture,” the meeting was chaired by Mustapha in company with other stakeholders.

The forum called on the federal government to strengthen border controls in order to check illegal immigrants and influx of weapons from other countries. It emphasised the need to resuscitate community-driven safety measures and address existing trust deficits to encourage willingness to release information to state security agencies.
“The meeting emphasised the need to recalibrate our traditional governance systems to the time-tested and proven method of responsiveness to civil society at the local levels, which hitherto prevailed in the country,” the communiqué stated.

The forum said there was need to automate the national security architecture and provide adequate resources for personnel, equipment, and operations. It highlighted the need to improve the current low police to population ratio and imbibe community policing. It reiterated the need for appropriate public enlightenment to raise security awareness among the citizenry.

The meeting equally recognised the coordinating role of the Secretaries to the State Governments and called on them to strengthen non-kinetic approaches, especially, by establishing a community level early warning systems.

The forum also noted progress made in strengthening federal and state governments’ relationship in delivering poverty eradication initiatives and called for sustenance and scaling up in view of the growing poverty situation in the country.

Farouk disclosed that there was an on-going high-level consultation to establish structures that would ensure that all agencies responsible for implementing poverty eradication programmes/projects cooperated. The consultation is also to ensure that the agencies are well coordinated to share experiences, share data and complement each other for effectiveness, better deployment of resources, and higher poverty reduction impacts, she said.

Farouk said at the federal level, there will be National Poverty Eradication Cooperation and Coordinating Committee (NPCCC) chaired by her. She explained that at the state level, there would also be a Poverty Eradication Cooperation and Coordination Committee (SPCCC), under the Offices of the SSGs, aimed at achieving similar objectives.

The minister said the ministry had established the National Social Register (NSR) aimed at capturing in details the data on all poor and vulnerable citizens in the country, adding, “So far, nearly 30 million individuals have been registered nationwide.”
The forum further examined the inextricable linkage between environmental degradation, security and conflict for resource use and management. It called for a National Forestry and Biodiversity Summit and urged the Federal Ministry of Environment to provide leadership for its convocation.

The forum urged state governments to strengthen their various forestry services especially, by prioritising sustainable forest management practices, developing and adhering to forest management plans, and strengthening the state forestry services. It appealed to the federal government to support the Federal Ministry of Environment in undertaking a comprehensive forest resources assessment.

Keyamo: Buhari has approved funds for beneficiaries of 774,000 jobs programme