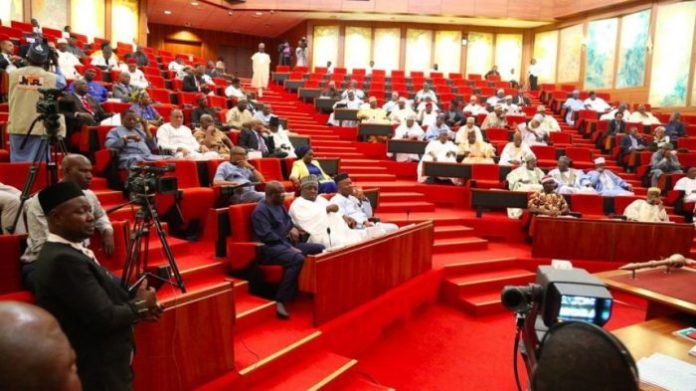 The Senate on Wednesday said it will wait till January to respond to the withholding of assent to the Electoral Act (amendment) Bill by President Muhammdu Buhari.

The upper chamber legislative chamber  said the move would enable it consult with the House of Representatives, which is presently on recess, and to seek the input of their constituents.

Meanwhile, senators were not comfortable with the decline of anticipated assent to the Electoral Act Amendment Bill by President Muhammadu Buhari and were  gathering signatures to override the president  in a bid to pass the Bill into law.

A source revealed that while Senator Lawan tried to pacify the lawmakers, some of them were adamant and insisted that the Red Chamber should make recourse to its veto power, as enshrined in the constitution. #

The governor said this on Tuesday while addressing journalists after a meeting with President Muhammadu Buhari at the Presidential Villa in Abuja.

He said his administration was convinced that bandits should be neutralized to end their nefarious activities,   noting that the whereabouts of the bandits were not hidden but that the military was being careful because of the collateral damage its operations could cause to the civilian community.

NECO Sets To Make Examinations Compulsory In All Schools

The National Examinations Council (NECO) has said it has begun moves to make its examinations  compulsory in all states in the country.

In a statement by the council’s  Head of Information and Public Relations Division, Mr Azeez Sani, expressed hope that other states would follow after the Cross River Government which had granted approval to make all public examinations conducted by NECO compulsory for all public schools in the state.

Sani said the Cross River State Governor, Professor Ben Ayade, gave the approval following a request by the Registrar/Chief Executive of NECO, Prof. Dantani Ibrahim Wushishi, during a courtesy visit to the governor in Calabar.

The governor was quoted to have expressed satisfaction with the performance of Cross River indigenes in NECO SSCE in the last five years.

He explained that NECO, being the only national indigenous examination body in the country, deserved the support of all Nigerians.#

The diplomatic spat between Nigeria and the United Arab Emirates (UAE) has been resolved as the Federal Governmenton Tuesday  restored Emirates Airline’s winter schedule comprising 21 frequencies to Nigeria.

However, Emirates Airlines which had suspended all flights to Nigeria temporarily in the wake of the fresh row is yet to react to the latest development.

It was learned that the airline might resume flights immediately in order to cater for thousands of its passengers whose flights were affected by the development.

The Emirates Airlines’ restriction took effect last week but the issue has been resolved barely a week after.

Director-General of the Nigeria Civil Aviation Authority, (NCAA), Musa Nuhu, in a letter addressed to the Country Manager, Emirates Airlines said the carrier’s winter schedule has been restored.

Police beef up security, ban use of fireworks in A’Ibom

This was contained in a statement signed by the Police Public Relations Officer in the state, SP. Odiko Macdon in Uyo on Wednesday.

Macdon said the Commissioner of Police (CP), Andrew Amiengheme, had ordered the immediate enforcement of the ban on the use of fireworks across the state during the yuletide.

He warned those who usually burn tyres on the roads to desist from such act as those caught would be prosecuted accordingly, noting that the law banning the sale and use of prohibited explosives (knockouts inclusive) is still in force.#

The Senate Tuesday received a formal request from President Muhammadu Buhari seeking the Senate’s approval for the virement of two hundred and seventy-six point eight billion naira to fund expenditures in the 2021 budget.

A breakdown of the virement request detailed by the Federal Ministry of Finance, Budget and National Planning, Zainab Ahmed, showed that one hundred and ninety-nine point one billion naira was for payment of local contractors’ debts, public service wage adjustment for Ministries, Departments, and Agencies, Sustainable Development Goals Projects 3 and Group Life Assurance.

Israel is to offer a fourth dose of a COVID-19 vaccine to people older than 60 or with compromised immune systems, and to health workers, as part of a drive to ramp up the shots and outpace the spread of the Omicron variant of the coronavirus.

A Health Ministry expert panel, whose findings have yet to be implemented recommended on Tuesday that those eligible receive the fourth shot at least four months after receiving their third.

Prime Minister Naftali Bennett, who has sought to drum up higher Israeli turnout for vaccines, welcomed the panel’s statement as “great news that will help the country  overcome the Omicron wave spreading around the world

The panel further recommended that the time allotted between second and third shots be reduced to three months from five, as such measures would be part of the preparation for the fifth wave of the pandemic.

Popular Nollywood actor Damola Olatunji has been charged to court after confronting a police officer for slapping his personal assistant in Abule Egba area of Lagos state.

Earlier in a viral video, a police officer was seen hiding his face after Damola confronted him and his colleagues for slapping his Personal Assistant because the actor “asked them to allow a young man whose bike they seized, to drive it”.

News of the actor being arraigned in court on charges of “public incitement and assaulting police officers” came after he disclosed that he is being held at Area P police division.

Filmmaker and actor, Lanre Adediwura confirmed that Damola was taken to Ogba Magistrate court after being “kept in police custody for standing against police intimidation.

Victor Osimhen said Tuesday that he will be available to play for Nigeria at the Africa Cup of Nations despite currently being out of action while recovering from a smashed cheekbone.

Napoli forward Osimhen looked certain to miss out on the continental tournament, which is scheduled to kick off on January 9, after initially being ruled out for three months following surgery on face fractures suffered against Inter Milan in late November.

But the 22-year-old insisted he would be ready to travel to Cameroon with the Super Eagles.

Osimhen is currently training for Napoli while wearing a protective facemask and waiting for the go-ahead to recommence playing earlier than expected, as the Cup of Nations is gearing up for its start next month against a backdrop of persistent rumours that it could be called off or postponed after already having been delayed by a year due to the Covid-19 pandemic.