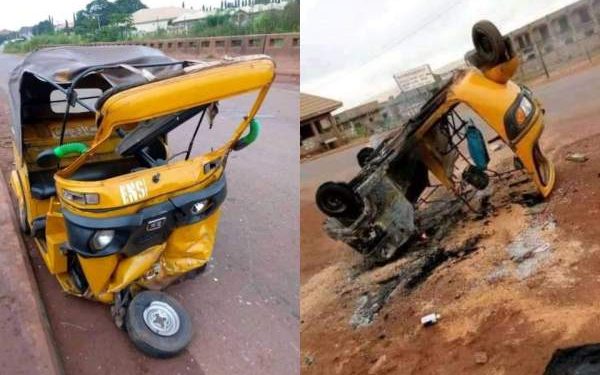 At least, three vehicles were set ablaze yesterday, while two auto-rickshaws (Keke) were burnt by persons suspected to be enforcing IPOB’s sit-at-home order in different parts of Enugu metropolis.

Yesterday, a van conveying bread from a factory in Emene Industrial Layout to Enugu town was burnt close to Emenite junction, while another vehicle, a minibus was burnt at New Market.

Another fully loaded Sienna Toyota bus was burnt at Ibagwa Junction. It was learnt that the occupants were forced to disembark without their luggages before the vehicle was set on fire by the arsonists.

On Monday, Daily Sun learnt that two auto-rickshaws (Keke) were burnt at Liberty Junction by suspected enforcers of the sit-at-home order. It took the intervention of security operatives to prevent further destruction of properties in the area.

Daily Sun, who monitored the exercise in some parts of Enugu reports that major markets, banks, petrol stations and schools were shut, while streets were deserted as residents observed the two-day sit-at-home order.

However, roadside traders were seen trading at the Abakpa market. Ogbete market, New market and Kenyatta market were empty despite the presence of security operatives.

Police patrol vehicles were stationed at strategic positions, while teams of security operatives were also sighted patrolling the entire town to forestall a breakdown of law and order.

A rickshaw rider, Ekene Nnaji, told Daily Sun that he was upset that young ‘street boys’ will resort to burning the properties of their fellow strugglers in the name of enforcing the sit-at-home order.

“The two Keke that they burnt yesterday were brand new. One of the Keke riders fainted immediately they set his Keke ablaze. The other person wanted to fight them, but they beat him mercilessly. We all ran away with our Keke and couldn’t do anything until a team of policemen arrived. We then came back to do our business.

“I don’t know why they would be burning things that belong to their fellow poor people. There is an arrangement whereby the rider pays the owner a little above the cost of the Keke over a period of time. The one that fainted is yet to even start his own payment. Where will he now get N1.3 million to pay the owner of the Keke?”

Kalu isolates after US trip