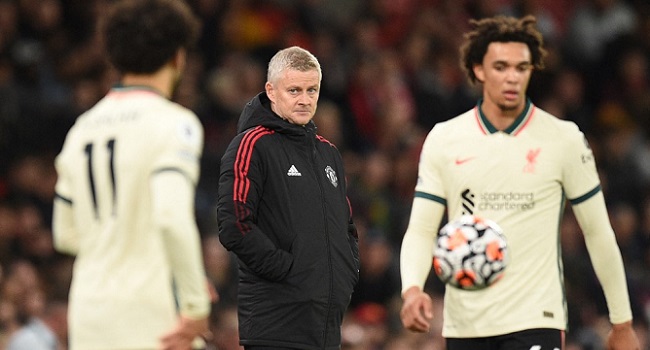 Manchester United travel to Tottenham on Saturday desperate to stay in touch with the Premier League’s top four as Chelsea, Liverpool, and Manchester City threaten to break away from the pack.

Ole Gunnar Solskjaer is clinging to his job after United’s humiliating 5-0 defeat at the hands of Liverpool last week. His side have taken just one point from the past 12 on offer.

Leaders Chelsea, Liverpool and defending champions City all have winnable matches this weekend while Leicester and Arsenal go head to head in an intriguing battle between two sides who have found their form.

The Norwegian has reportedly been given three games to save his job but the fixtures are daunting — trips to Tottenham and Atalanta before a derby against Pep Guardiola’s Manchester City.

The Liverpool drubbing came a year after 10-man United collapsed to a 6-1 home defeat against Spurs.

“This is miles worse,” Solskjaer said. “We have big games coming up, so no time to sulk, no time to feel sorry for yourself. We have to come together.”

United have flattered to deceive since Solskjaer replaced Jose Mourinho in December 2018, failing to win silverware or mount a realistic title challenge.

Despite recently recruiting Cristiano Ronaldo, Jadon Sancho and Raphael Varane, they find themselves eight points off leaders Chelsea and realistically out of the title picture.

They have kept just one clean sheet in all competitions this season and will be without the suspended Paul Pogba in London.