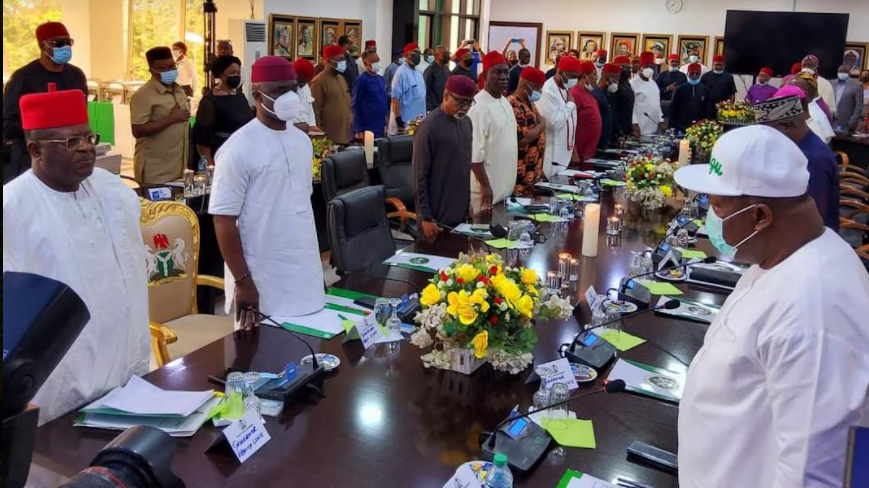 A meeting of South-East leaders ended in Enugu on Tuesday with a declaration that no further sit-at-home would be observed in the zone.

Recall that despite the Indigenous People of Biafra, IPOB, coming out to say it has cancelled the every Monday sit-at-home, the region has remained under lockdown on the first day of the week, with some unknown persons enforcing what IPOB called “non-existing order.”

However, in their meeting which was attended by political, religious and traditional leaders, they said such order would not be condoned any further.

A communiqué issued after the meeting was read by the Chairman of South-East Governors’ Forum and Ebonyi State Governor, David Umahi.

At the commencement of the meeting, they observe a minute silence for all those who have lost their lives to the security challenges in the country, especially in the South-East zone.

Full text of the communiqué below:

1. The Governors and leaders of the South East condemned the killings in the region and have agreed to join hands with security agencies to stop the killings;

2. The meeting condemned the sit-at-home orders, which are mostly issued by our people in diaspora who do not feel the pains, the meeting resolved that Governors and all people of
the south East do everything within the law to ensure that there is no further sit-at-home in the South East and that people are allowed to freely move about in the zone;

4. The meeting received the Committee report from Ohaneze on various matters affecting the South East, especially on the issue of security and marginalization of the South East people, and resolved to study the reports from Ohaneze Worldwide for immediate implementation, and engagement with the Federal Government for amicable settlement of all issues agitating the minds of our people, especially the youths;

5. The meeting agreed to support security agencies to restore peace in the South-East;

7. The meeting commended all groups and the clergy for their efforts at interfacing with our youths

8. The meeting mandated our clergymen, Bishops, CAN, Ohaneze and Traditional Rulers to continue to dialogue with our youths.