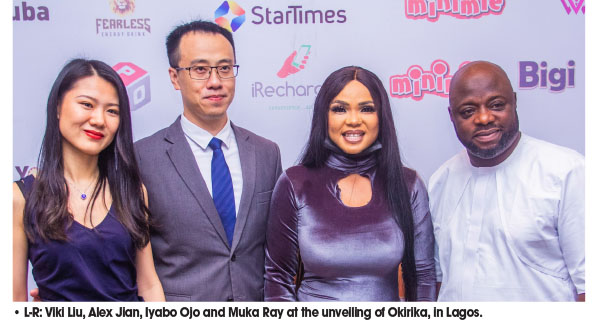 The rowdy but hilarious market for used wear in Nigeria, Okirika, has been made into a comedy series.

Produced by Muka Ray and powered by StarTimes, the series boasts a stellar cast drawn from mainstream Nollywood as well as social media platforms. The storyline is written to tickle the laughter sensory of viewers while passing a moral message.

Speaking at the event, project coordinator for Okirika, Iyabo Ojo said, “Aside being educative, Okirika is going to entertain you, make you laugh and take out the stress.”

Viki Liu further stated: “With Okirika series, StarTimes is demonstrating its commitment to satisfying the growing demands of viewers for local content. I was attracted to the Okirika story the first time I read the pitch. People have every reason why they buy luxurious stuff but might have all kinds of reasons why they choose to buy Okirika. The story about Okirika is very interesting and it’s what everyone should look out for.”

On his part, StarTimes’ CEO, Alex Jian, promised more investment in Nollywood. “In July, I promised that Ile Alayo is just our first step, and StarTimes is going to invest more in local content. Today, we are reuniting for our second project this year. We are still on the journey, welcoming new partnerships, investing in fresh ideas, providing a stage for young talents.”