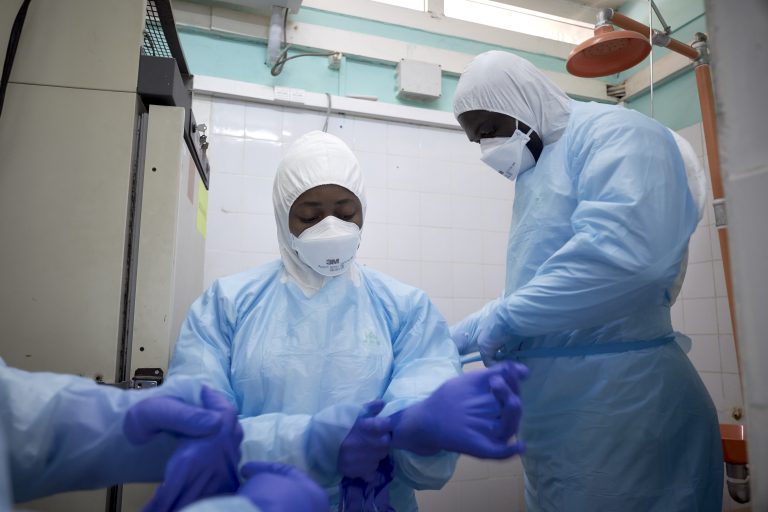 Officials of states including Lagos, Anamba, Ogun and Kaduna on Sunday said that as from Monday (today), they would step up enforcement of COVID-19 preventive measures such as wearing of face masks, social distancing in vehicles and hand washing.

Recall that following the persistent increase in COVID-19 cases in the country in April, the Federal Government introduced phase one lockdown in Lagos and Ogun states as well as the Federal Capital Territory from April 27 to May 4.

The country also went through phase two from May 5 to June 29 and phase three from June 30 to July 27.

During the period, the Presidential Task Force on COVID-19 and state governments banned gatherings in worship places and stopped inter-state travels.

Since July, many Nigerians have abandoned non-pharmaceutical interventions, such as wearing of face masks and social distancing.

These have triggered the second wave of the virus, which the PTF announced on Thursday.

The Lagos State Commissioner for Information, Mr Gbenga Omotoso, in an interview on Sunday said the state safety commission as from Monday (today) would enforce the strict compliance with the COVID-19 guidelines.

He stated, “We are stepping up advocacy on radio and television stations so that people can know that the second wave we are talking about is upon us. We are not planning to shut down the economy because we can’t afford another lockdown.

“From tomorrow (Monday), we will enforce strict obedience to the COVID-19 protocols on those boarding our BRT. Civil servants from level 14 downwards have also been told to work remotely from Monday as well.”

The state government had last week vowed to impose N20,000 fine on anybody that violated COVID-19 protocols.

Kaduna workers to operate from home

Also, the Kaduna State Government on Sunday directed all civil servants below Grade Level 14 to work from home as from Monday (today).

The state also limited the service hour of churches and mosques as a way to curb the coronavirus in the state.

The state Governor’s Special Adviser on Media and Communication, Mr Muyiwa Adekeye, in a statement, said that the Head of Service would issue service-wide updates as required.

He explained that the governor, Nasir el-Rufai, had signed new regulations to contain the spread of COVID-19 in the state.

Adekeye said it was mandatory for residents to wear face masks, adding that “organisations and individuals that allow people into their premises have the responsibility to enforce the ‘no mask, no entry’ mandate.

According to him, businesses must provide thermometers for temperature checks, and sanitisers or hand-washing equipment and physical distancing measures within all facilities.”

He added, “Places of worship must enforce facemasks, provide sanitisers and ensure physical distancing. The number of worshippers will be capped. Congregational worship should not exceed one hour.

“Supermarkets and providers of personal services such as hairdressing and barbing salons can remain open, but service providers and customers must use facemasks and limit the number of persons they admit and serve at any time.”

The Imo State Governor, Hope Uzodimma, in a statewide broadcast on Sunday, ordered the closure of the state secretariat beginning from Monday.

Uzodimma directed that all government workers except permanent secretaries and political appointees should stay away from office till further notice.

The governor said wearing of face masks had become compulsory as mobile courts had been directed to arrest and prosecute anyone without a face mask.

He also said social gatherings in the state during this Christmas should not have more than 1 100 persons, adding social distancing must be maintained at such events.

On its part, the Ogun State Government said it would soon announce more stringent protocols to curb the second wave in the state.

The Special Adviser to the state Governor on Public Communications, Remmy Hazzan disclosed this on Sunday in an interview

Hazzan said the government was aware of the second wave of COVID-19 and would take every measure to stop its spread in any part of the state .

He said, “Very more stringent protocols would be announced. We may reintroduce some things that have already been relaxed and even tighten them more.”

In Anambra State, it was gathered that the state Governor, Willie Obiano, might ban large social gatherings during Christmas to curb the spread of COVID-19.

A governor’s aide, who confided in one of our correspondents, said, “His Excellency will announce the ban on or before Christmas. This is because you know our people like to hold social and church activities during this time, but the government won’t allow that.

But the state government warned against large gatherings during the Yuletide.

The state Commissioner for Information and Public Enlightenment, Mr C-Don Adinuba, stated this in a press statement.

He stated, “The Anambra State government will like to remind all our people that the whole world is still passing through a very unusual time caused by the global pandemic. Therefore, large gatherings are not encouraged this time in the interests of our people.”

The FCT Administration warned that the cases of COVID-19 in Abuja were becoming alarming.

Okechukwu, came down with the virus on December 3, 2020 and was discharged from the hospital on December 19.

The doctor, who is in charge of the FCT COVID-19 team, expressed worry that the situation might degenerate if the spread of the disease was not curbed.

Stating that the FCT was already in the middle of the second wave, Okechukwu said, “In Nigeria, especially in the FCT, we were part of the states that had an overwhelming number of cases. When we had our first wave, we noticed that the peak was in July 2020.

“In that July, we identified a total of 1,940 cases of confirmed COVID-19. That was our peak. Suddenly, the cases went down.

From the FCT data, the medical doctor said 73 per cent of the cases involved those spreading the virus ignorantly.

She added, “My experience at the centre was not too palatable; that is why I am making this video so that everyone will be cautious and know that COVID-19 is real and it’s all over the nation.

“The spread is overwhelming, a lot of people are coming down with COVID-19. When we look at the data we have, there was an increase of 127 per cent in this December as compared to the peak we had in July during the first wave.”

The Ministry of Aviation said the PTF was monitoring global air travel situations.

When asked if the Federal Ministry of Aviation would bar some United Kingdom flights from coming into Nigeria, as being done by some countries, the ministry’s Director, Public Affairs, James Odaudu, said the situation was still being monitored.

He noted that although it was not in the ministry’s position to make such pronouncements, the required decision would be taken by the Presidential Task Force on COVID-19 when necessary

In his response to an enquiry by our correspondent in Abuja on Sunday, Odaudu said, “The decision belongs to the Presidential Task Force on COVID-19.

“I’m sure they are monitoring the global situation and will take the necessary decisions.”

Meanwhile, there were indications that the Director-General of the National Institute for Policy and Strategic Studies, Prof. Habu Galadima, whose death was announced on Sunday, died of COVID-19.

About 15 senior management staff of the institute were on Sunday summoned for a compulsory COVID-19 test on Monday, a NIPSS source said

It was gathered that they would proceed on isolation. Galadima in the early hours of Sunday.

Galadima’s public appearance was in Abuja on Tuesday during the opening of the roundtable discussion with the theme: ‘Political parties, party ideologies and national interest’, jointly organised by NIPSS and Political Parties Leadership and Policy Development Centre.

A top source in the NIPSS said on Sunday that Galadima took ill at the opening of the event in Abuja.

The source, who spoke on how Galadima died, said he could not attend the next day’s 2020 annual summit of political parties and stakeholders with theme: ‘Two decades of party politics and democracy in Nigeria: Issues and prospects’ which held at NICON Luxury and also jointly organised by NIPSS and PPLAlDC.

He said, “Yes, that was what happened; our DG died today (Sunday) in Abuja, around 10/11 am. All of us now; we have been unable to go anywhere.

“We have returned to Jos. More so, the programme ended and we came back to Jos, except for him and some management staff who were still in Abuja. A handful of us came from the NIPSS, but I can’t really say the specific number.”

Meanwhile, the Senior Special Assistant to the President on Media and Publicity, Garba Shehu, on Sunday quoted the President, Major General Muhammadu Buhari (retd.), as expressing sadness over the death.

Galadima is believed to have died of complications from coronavirus.

In a statement titled, ‘President Buhari mourns passing of NIPSS DG, describes him as intellectual colossus’, Shehu added that Buhari said Galadima stood tall in the field of scholarship and knowledge.

Also, the Plateau State Governor, Simon Lalong, said he was shocked over the death of the DG of NIPSS.

He described the late professor as an astute scholar of international repute, administrator and professional who demonstrated uncommon commitment in carrying out every responsibility he was assigned

Security: Resign from your office as Gov – APC tells Obaseki