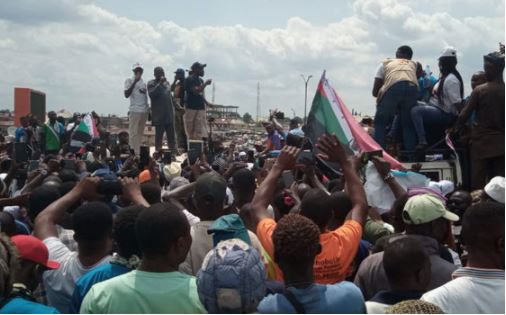 Some residents of Osogbo, Osun State capital have occupied the streets agitating for the creation of Yoruba nation.

Clad in t-shirts with the ‘Yoruba Nation’ inscription, the protesters converged on November 27 Bridge before proceeding to Nelson Mandela Freedom Park, Osogbo, the Osun State capital.

The group, under the umbrella of Omo Oduduwa United marched through the streets of Oshogbo from Ogo-Oluwa, Aregbe junction, Fakunle, Ola-Iya, and Odi Olowo before gathering at the freedom park to make their demands known.

They carried placards and chanted songs of solidarity.

He joined other agitators at the Nelson Mandela Freedom Park to demand the Yoruba Nation.

Igboho also demanded the release of operatives of the Oodua Peoples Congress (OPC) who were detained for arresting notorious Fulani herder, Iskilu Wakili, in the Ibarapa area of Oyo State.

The venue of the rally was, however, heavy with the presence of operatives of the Nigeria Police Force as well as men of Nigeria Security and Civil Defence Corps.