HomeNEWSTB Joshua Will Be Missed For His Spiritual Contributions, Philanthropic Gestures – Buhari

TB Joshua Will Be Missed For His Spiritual Contributions, Philanthropic Gestures – Buhari 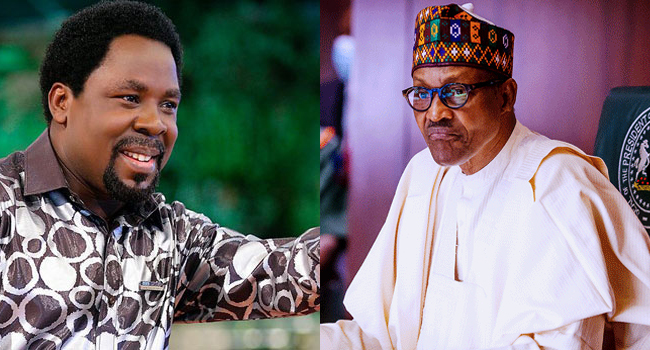 President Muhammadu Buhari has commiserated with the family and members of The Synagogue, Church of All Nations (SCOAN) on the passing of their father and founder, Pastor Temitope Balogun, popularly known as TB Joshua.

In a statement signed by the Special Adviser on Media and Publicity to the President, Femi Adesina on Sunday, President Buhari noted that the renowned televangelist will be missed by his followers all over the world not only for his spiritual contributions but for touching many lives through his philanthropic gestures.

He urged Pastor Joshua’s followers to take solace in the knowledge that life is not measured and defined by chronological longevity but by enduring legacies and lives touched positively.

President Buhari also condoled with the government and people of Ondo State and prays that God Almighty will accept the soul of the departed pastor.

In a post early on Sunday, the church sent out a communique stating that the pastor had died on Saturday.

The founder of the Synagogue Church Of All Nations was 57 at the time of his death.

“God has taken His servant Prophet TB Joshua home – as it should be by divine will. His last moments on earth were spent in the service of God. This is what he was born for, lived for, and died for,” the church’s statement partly read.

The communique, however, did not stipulate the true cause of his death.