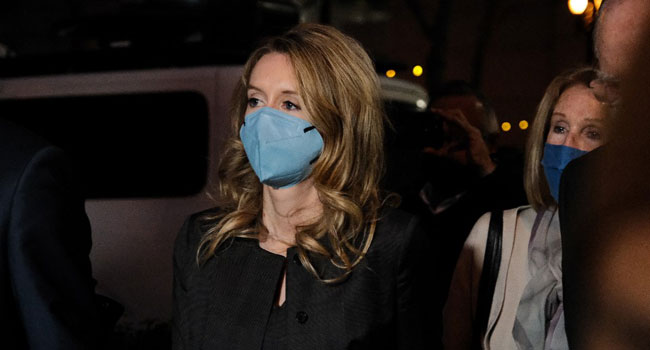 Fallen US biotech star Elizabeth Holmes was convicted on Monday of defrauding investors in her blood-testing startup Theranos, in a high-profile case seen as an indictment of Silicon Valley culture.

Holmes is a rare example of a tech exec being brought to book over a company flaming out, in a sector littered with the carcasses of money-losing companies that once promised untold riches.

Her case shone a spotlight on the blurred line between the hustle that characterizes the industry and outright criminal dishonesty.

Jurors took seven days of deliberations to reach their verdict, finding her guilty of four counts of tricking investors into pouring money into what she claimed was a revolutionary testing system.

But the panel — who had listened to weeks of sometimes complex evidence — also acquitted her on four charges and could not reach a verdict on three others.

“The guilty verdicts, in this case, reflect Ms. Holmes’ culpability in this large-scale investor fraud and she must now face sentencing for her crimes,” US Attorney Stephanie Hinds said in a prepared statement read outside the courthouse by a representative.

Holmes made no comment as she left the court when asked if she intended to appeal.

The 37-year-old now faces the possibility of 20 years behind bars for each conviction. She remains at liberty ahead of another hearing on the terms of her bail next week. No date was set for sentencing.

Holmes had vowed to revolutionise health diagnostics with self-service machines that could run an array of tests on just a few drops of blood, a vision that drew high-profile backers and made her a billionaire by the age of 30.

She was hailed as the next tech visionary on magazine covers and collected mountains of investors’ cash, but it all collapsed after Wall Street Journal reporting revealed the machines did not work as promised.

Prosecutors spent 11 weeks presenting over two dozen witnesses, as they painstakingly laid out their argument that Holmes knew her technology fell short, and deliberately misled investors and patients.

She personally put the logos of pharma giants Pfizer and Schering-Plough onto Theranos reports hailing the company’s blood-testing technology, which were then shared with investors.

That was done without the firms’ permission and was a key piece of the prosecution’s argument that she purposely tried to inflate Theranos’s credibility in order to win backers.

Though big-name Theranos investors like Rupert Murdoch and Henry Kissinger were on the witness list, the most prominent backer to take the stand was ex-Pentagon chief Jim Mattis.

The defense called only one significant witness, Holmes herself, as it argued the fallen entrepreneur had genuinely believed in Theranos’s vision, invested herself heavily in its success, and had simply failed.

Holmes also sought to shift some of the blame to Ramesh “Sunny” Balwani, a boyfriend nearly two decades her senior whom she had brought in to help run her company.

She fought back tears as she told jurors that Balwani denigrated her and forced himself on her sexually when angry — accusations that he has strongly denied.

He is due to stand trial separately for his role in the company’s operations and has pleaded not guilty.

One of the startup world’s most repeated cliches is “fake it till you make it”, where ambitious entrepreneurs with an idea that almost works convince people to invest massive sums of money in the hope that one day it will.

It is exceedingly rare for founders of failed Silicon Valley companies -– of which there are many –- to face fraud prosecution over unrealized promises and unreturned investments.

Some tech world figures, like former Reddit chief Ellen Pao, said sexism may have been a factor in the prosecution, but others argued Holmes had gone too far in trying to prop up her steadily dissolving vision.

After the 2015 Wall Street Journal reporting that questioned whether Theranos’s machines worked as promised –- and ultimately brought down the company –- Holmes went on the offensive in the media.

“First they think you’re crazy, then they fight you, then all of the sudden you change the world,” she said in a TV interview.