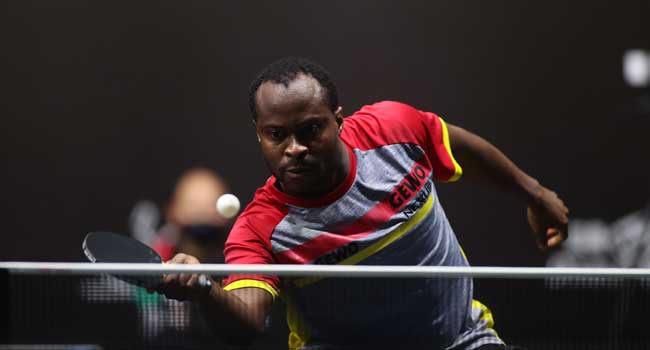 Team Nigeria Captain for the Tokyo Olympics, Quadri Aruna has been listed among the top 15 seeded players in the men’s singles of table tennis event which kicks on Friday, July 23 in Japan.

65 players will compete in the men’s singles and for being the highest-rated African in the world, Aruna has been seeded number 15 behind Frenchman Simon Gauzy.

The Nigerian has been considered as one of the star players to watch out for in table tennis event. He will be hoping to exceed his quarterfinal finish at Rio 2016 in Japan.

Qualified to Tokyo based on his world ranking, Aruna will be awaiting his first-round opponent when the draws hold this week with Egypt’s Omar Assar seeded 28 while Aruna’s compatriot- Olajide Omotayo is seeded 49 in the men’s singles.

In the women’s singles, six-time African champion, Egypt’s Dina Meshref has been seeded 19th while Nigeria’s Offiong Edem is seeded 53 among the 70 athletes competing in the women’s singles event. Record-breaking Olufunke Oshonaike who is making a seventh appearance at the gams is seeded 60th.

Meanwhile, China’s Fan Zhendong and Chen Meng have been unveiled as the top-seeded entries for the men’s and women’s singles categories.

Making his first appearance on the Olympic stage in Tokyo, Fan Zhendong, 24, is bidding to become the sixth Chinese player to take home men’s singles gold. Meanwhile, fellow Fan’s compatriot and defending champion Ma Long, who has been named as the number two seed, attempts to recapture the magic of five years ago as he defends his highly sought-after title at the Tokyo Metropolitan Gymnasium.

Seeded third, 18-year-old Tomokazu Harimoto is bound to catch the eye as the ever-improving teenager looks to guide Japan to a historic first gold medal in the category.

A new women’s singles champion will be crowned in the Japanese capital with all eyes firmly fixed on two Chinese debutants as the country looks to make it nine gold medals in a row. Making the summit of the list, top seed Chen Meng leads the way with Sun Yingsha occupying the immediate position below on the list. China also leads the way in both the Men’s Team and Women’s Team events with the sporting powerhouse pursuing a fourth-straight gold medal finish in both categories.