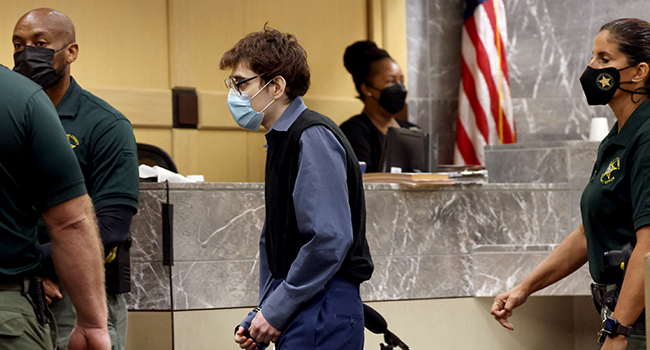 A former student pleaded guilty on Wednesday to killing 17 people in a shooting rampage at a high school in Parkland, Florida, and apologized in court to relatives of the victims.

Nikolas Cruz, who was 19 at the time, took a legally purchased AR-15 assault rifle into Marjory Stoneman Douglas High School, his former school, on Valentine’s Day in 2018 and killed 17 students and staff members.

Cruz pleaded guilty to 17 counts of first-degree murder and 17 counts of attempted murder for those wounded during the attack, which sparked a student-led movement for tighter gun control laws.

Cruz, who was dressed in a blue collared shirt and sweater vest and wearing large glasses and a face mask, responded “guilty” as Judge Elizabeth Scherer read off each of the charges in a Fort Lauderdale courthouse.

He told the judge he was suffering from a “little anxiety” but understood the charges against him and was pleading guilty of his own volition.

Cruz will now go before a jury for the penalty phase of the trial. He faces a minimum of life in prison without parole but prosecutors have said they will seek the death penalty.

The judge set January 4, 2022 for the start of jury selection for the penalty phase.

Following his guilty pleas, Cruz, who is now 23, apologized to the relatives of his victims.

“I am very sorry for what I did and I have to live with it every day,” he said, reading from a prepared statement. “It brings me nightmares.”

“If I were to get a second chance I would do everything in my power to try to help others,” he said.

Addressing relatives of the victims, Cruz said: “I believe it’s your decision to decide where I go, whether I live or die, not the jury’s.”

Relatives of some of the victims were among the spectators in the courtroom and wiped away tears as a prosecutor recounted the attack in chilling detail.

The shooting was the worst school massacre in the United States since the horror at Sandy Hook Elementary School in Newtown, Connecticut, in 2012, which left 26 dead.

The Florida shooting stunned the country and sparked new efforts, led by students from the school itself, for tougher gun control — although the polarized US Congress has yet to enact meaningful gun reform.

A rally organized by Stoneman Douglas students, “March for Our Lives,” drew hundreds of thousands to the nation’s capital in March 2018.

President Joe Biden marked the third anniversary of the Parkland shooting in February with a call on Congress to enact “commonsense” gun law reforms.

“This administration will not wait for the next mass shooting to heed that call,” Biden said. “We will take action to end our epidemic of gun violence and make our schools and communities safer.”

Biden said he wants Congress to pass laws that would require background checks on all gun sales and ban assault weapons and high-capacity magazines.

Cruz bought the weapon legally, despite having been in local records as having a history of mental health problems.

Expelled from school for disciplinary reasons, Cruz was known to be fixated on firearms — and had reportedly been identified as a potential threat to his classmates.

The FBI confirmed it was alerted several months before the attack to a message posted on YouTube, in which a user named Nikolas Cruz vowed: “I’m going to be a professional school shooter.”

On the day of the attack Cruz arrived at the school in an Uber, began shooting indiscriminately at students and staff, and fled nine minutes later, leaving behind a scene of carnage.

He was arrested nearby shortly afterwards.

Footage recovered from his phone showed he had filmed his plans to attack his former school, saying his goal was to kill “at least 20 people.”

Cruz told a detective after his arrest that he heard demons ordering him to “buy weapons, kill animals and destroy everything.”