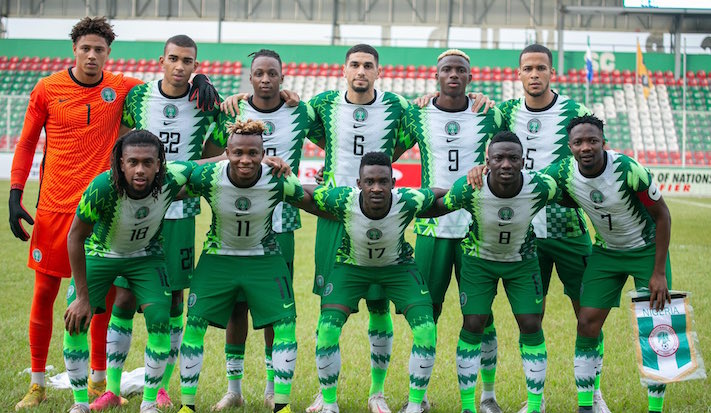 Leon Balogun and Victor Osimhen scored a goal each as the Super Eagles beat the Central African Republic on Sunday to avenge their shocking loss to the Les Fauves in the reverse fixture of the 2022 World Cup qualifier.

The Rangers defender scored in the 32nd minute of the encounter to break the deadlock in the clash in Douala, Cameroon.

He latched on to a cross to beat the CAR goalkeeper at his near post before Osimhen got the second goal just before the half-time break.

Nigeria had lost the first leg of the encounter 1-0 in front of a home crowd in Lagos State but maintained the lead in Group C of the qualification series.

Thursday’s defeat in Lagos came as a shock to many football fans, heaping pressure on Rohr who has been in charge of the Super Eagles since 2016.

But the German was confident that his men would come out victorious against the Wild Beast in Cameroon.

“We have to play our football and on this great pitch, I think we can do it, better than the other day,” he told the Super Eagles media team before Sunday’s win.

“We have to get a result. Everybody knows that now it is necessary to get this victory. We didn’t get it the other day. Three days later, we are here now, having the opportunity to make good rehabilitation.”

Rohr’s comment was earlier corroborated by the President of the Nigeria Football Federation (NFF), who though admitted that the loss at home left everyone stunned, backed the three-time African champions to deliver in Douala.

“This [CAR defeat] is a setback, which can be quickly reversed, and the Nigerian Spirit is what we will take to Cameroon,” he insisted.

“The NFF is backing the team to retain a strong hold on the group and qualify to the knockout phase.”