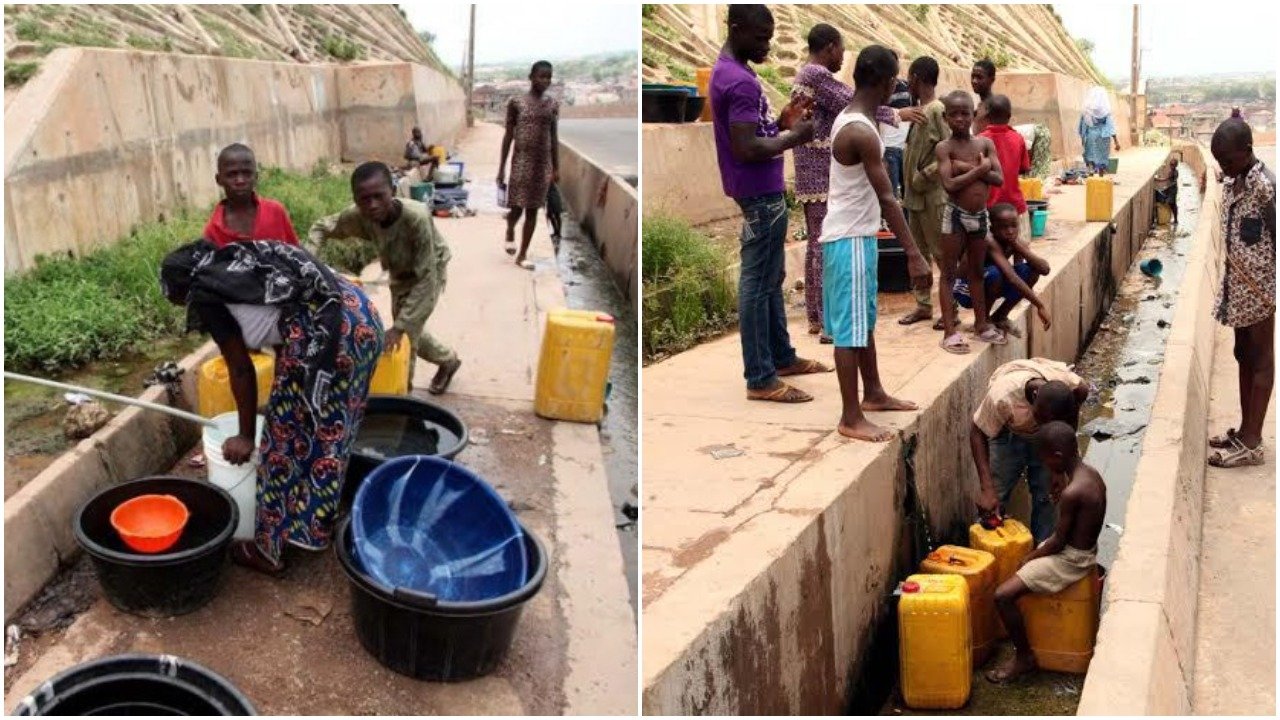 Residents of Abeokuta, the Ogun State capital, are currently facing hardship due to the unavailability of water for domestic use amid the deadly coronavirus pandemic

The need to stop the spread of the deadly COVID-19 pandemic has made regular handwashing an important routine for all and sundry.

The World Health Organization (WHO) and other agencies of government have recommended that individuals should wash their hands regularly with soap under running water within 20 seconds or more.

In Abeokuta, the Ogun State capital, washing of hands is simply a difficult task owing to water scarcity.

“As the dry season sets in, water becomes very scarce for the majority of us living in Abeokuta, making life more miserable for us. We are always like this during dry seasons”, Tunji Ougbemi, a resident of Isale-Igbein said

Despite the nations economic situation and the effect of the COVID-19 lockdown, many residents of the Ogun State capital said they spend about N10,000 monthly to buy water for their domestic use.

It was reported that the majority of those who could not afford to buy water now search for the essential commodity, which is now as scarce as gold.

Trekking from one location to the other, residents of the ancient city were seen with jerrycans as they struggle to locate where water is available.

A student of one of the higher institutions in Abeokuta, who identified himself simply as Francis, said, “I usually wake up around 5am everyday to search for water. There is no water in Abeokuta. If you wake up by 7am, you may not bathe that day because there won’t be water in the wells any more. I am tired of this.”

Speaking further, Francis recalled that he used to wash his hands when there was water.

“From April last year, I used to wash my hands regularly as recommended by health officials in order to stop the spread of coronavirus. Then, there was water because rain was still falling. But, how do you expect me to wash my hands when there is no water to bathe, cook or do other things?” he queried.

Some locals now fetch water from unhygienic sources; defying warnings that they might contract cholera or other waterborne diseases.

In a tour around the ancient city, people were seen scooping water from broken water pipes in gutters.

Locals lamented that many of the public water taps provided by the government, as well as some boreholes built by politicians and NGOs in different locations, are mere ‘decorations’.

Our Correspondent noticed that water wells seen in front of houses around these places are empty as though they were ordinary pits. But, residents explained that “the wells are more or less reservoirs because they only have water during rainy seasons.”

“Water has been a problem in Abeokuta from time immemorial. A larger percentage of the people cannot afford to dig boreholes or even wells.

“This is because of the ‘rocky nature’ of the soil, which makes digging more difficult and expensive. That is why most people are seen on the streets with containers, searching for water from one place to another,” Hazzan Babajide, an elderly resident of Ake told DAILY POST.

In his words, a resident of Oluwo, Mr Sulaimon Imran, called on government at all levels to come to the aid of Ogun people by providing state-of-the-art solar-powered boreholes in strategic locations, and placing same under the supervision of the Community Development Associations (CDA) for proper maintenances. This he said would reduce water scarcity, adding that it is the only way to encourage regular handwashing in the face of the deadly coronavirus.

As of today, the wash hand basins in most schools and other public places are without running water.

Meanwhile, the water problem facing the people of Abeokuta may be over in July 2021.

This was confirmed by the State Governor, Prince Dapo Abiodun, on Friday.

Gov Abiodun, in a statement, said contractors working on the Ogun State Water Corporation dam in Iberekodo, Abeokuta are intensifying efforts to deliver the same as envisaged.

“By July, Abeokuta and its environs will begin to have a regular supply of potable water.

“This is as I can confirm that the contractor in charge of the rehabilitation of the State Water Corporation dam in Iberekodo, Abeokuta has intensified work to automate it and stop the needless loss of resources,” the Governor said in a statement on his social media handles.