HomeNEWSWe are not willing to return to school —Katsina schoolboy

We are not willing to return to school —Katsina schoolboy 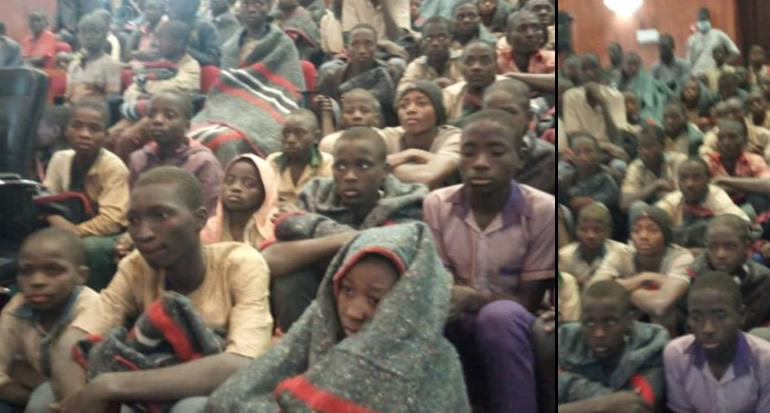 Schoolboys abducted at the Government Science Secondary School, Kankara, Katsina State have lamented the sufferings they went through in their kidnappers’ den.

It was reported that hundreds of the schoolboys were kidnapped by suspected bandits on Friday, December 11.

They were released on Thursday in Zamfara State and taken to Katsina State on Friday morning amidst tight security.

According to them, they were kept in the cold and ate once in 48 hours.

In a video that surfaced online, one of the abducted schoolboys, Abubakar Salisu, said a majority of the students are not willing to return to the school where they were kidnapped.

He regretted that the location of the school made it difficult for security operatives to rescue them.

Salisu said they felt the efforts of security operatives attempting to rescue them in one of the locations that they were kept.

He said, “I was very happy (to be rescued). At the time we were there (kidnappers’ den), we were kept in the cold. They gave us only cassava to eat.

“At night, we defecate and urinate on the same spot that we sleep. If we request to use the toilet, we are beaten.”

When asked if they are willing to return to school, Salisu replied, “None of us is willing to go back there. But some will go if the government increases the number of security operatives guarding us, without that we are not going back.

Another schoolboy complained about his poor state of health.

He said, “They kidnapped us from December 11 and freed us on December 17. We really suffered in the bush. We were hungry in the bush and we had no mattress. Sometimes, it takes two days before we eat. They give us only cassava.

“I feel hungry. I am not feeling fine. I am sick.”