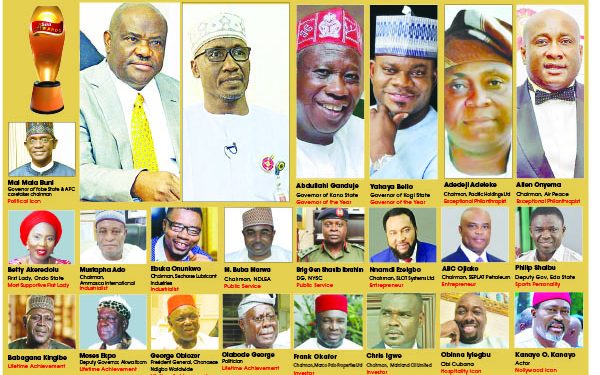 The Sun Publishing Limited, publishers of Daily Sun, Saturday Sun, Sunday Sun and Sporting  Sun, has announced winners of The Sun Awards for 2020.

This is in line with the newspaper’s vision of recognising men and women who have distinguished themselves in their respective endeavours and contributed immensely to the development of the country.

The Sun, in a statement, disclosed that Rivers State Governor, Nyesom Wike and the Group Managing Director of the Nigerian National Petroleum Corporation (NNPC), Mallam Mele Kyari, won the Man of the Year award.

It announced that Governor Abdullahi Ganduje of Kano State and Governor Yahaya Bello (Kogi State) clinched the Governor of the Year; while Governor Mai Mala Buni of Yobe State, who doubles as the Caretaker Chairman of the All Progressives Congress (APC), won the Political Icon award.

Deputy Governor of Edo State, Comrade Philip Shaibu, is the winner of Sports Personality of the Year Award.

The statement explained that the formal presentation of the awards is slated for Saturday, October 16, 2021 at the Expo Convention Centre, Eko Hotels & Suites, Victoria Island, Lagos.