World Bank Chief In Sudan For First Visit In 40 Years 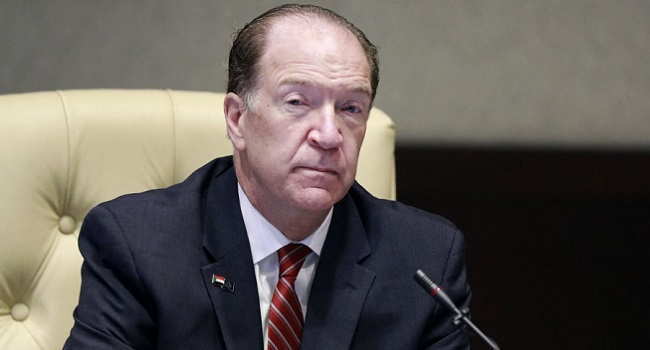 World Bank President David Malpass, in Sudan on Thursday for the first visit in nearly 40 years by a head of the development body, praised the country’s reforms but cautioned against “political slippages”.

A transitional government and a civilian-military Sovereign Council have been running the African nation since 2019 after the ouster of long-time autocrat Omar al-Bashir.

Under Bashir, Sudan endured decades of corruption and stringent US sanctions.

The United States removed Sudan from its state sponsor of terrorism blacklist in December 2020, eliminating a major hurdle to much-needed aid and financial investment.

“Two years ago, Sudan’s transitional government inherited a deeply damaged economy and society that had suffered decades of conflict and isolation,” Malpass said during a speech in Khartoum.

“Even as the people resolved to break with the past, Sudan faced extraordinary headwinds,” including the Covid-19 pandemic and unprecedented floods, he said.

“While there is much work ahead, I commend the Sudanese authorities, civil and military, for their efforts and achievements in working together toward a country that is unified, tolerant and can deliver a better future for all its citizens,” said Malpass, an American who noted “this historic time.”

Just over a week after Sudan’s government said it had thwarted a coup attempt, he added: “It’s critical to avoid political slippages because there is no development without peace and stability.”

That transition has remained shaky, reeling from deep fragmentation among political factions, economic woes and a receding role for civilian leaders in one of the world’s least developed countries.

In June hundreds of protesters took to the streets to demand the government’s resignation over International Monetary Fund reforms leading to the debt relief.

As part of the measures, Sudan scrapped diesel and petrol subsidies and carried out a managed float of the Sudanese pound to stem a rampant black market.

Malpass acknowledged “the remarkable resilience of the Sudanese people -– your drive to build a better Sudan despite the challenges is truly inspiring.”

The country’s civilian Prime Minister Abdalla Hamdock, whose government had vowed to fix the economy, welcomed the World Bank chief.

“It is indeed a historical moment… your visit comes at another pivotal moment in Sudan history,” Hamdok told the gathering of World Bank officials, government ministers and other dignitaries.

While highlighting Sudan, Malpass more broadly looked at ways of boosting global growth that is inclusive and sustainable when the Covid-19 pandemic “has resulted in increased poverty rates again after decades of steady decline.

“It has pushed nearly 100 million people into extreme poverty, with several hundred million more becoming poor, many of them in middle-income countries,” he said, according to a World Bank statement.

“This unprecedented crisis has set in motion a time of upheaval. The many choices in coming years will determine whether developing countries suffer a lost decade or can usher in rapid growth and economic transformation,” Malpass said.

Soldiers Open Fire On Protesters In Sudan After Military Coup

Crowds protested into the night in Sudan