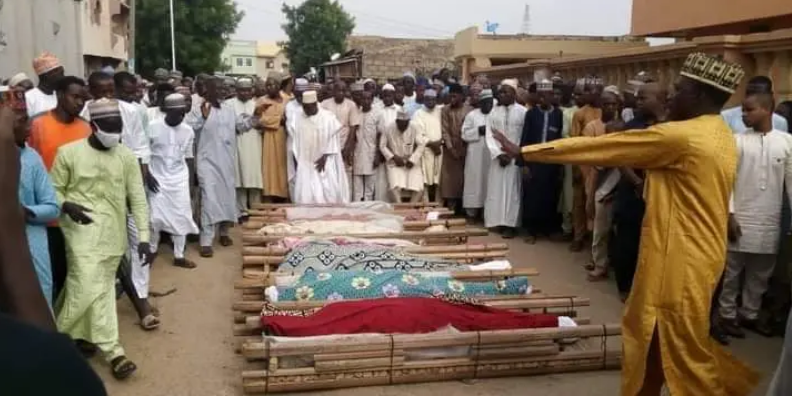 The remains of seven people from Sani Mai Nagge in Gwale local government area of Kano State out of 17 who died in a motor accident on Saturday have been buried in Kano, on Sunday.

All 17 died on Saturday aboard a Kano Line bus on their way from Zaria to Kano after attending a friend’s wedding.

The funeral prayer for the deceased was conducted at 8.30 am Unguwar Gwale burial ground.

Sani Mai Nagge Ward Head, Alhaji Aliyu Muhammad Nababa told journalists that although many said 17 people died in the accident, eight of those who died are from Sani Mai Nagge.

Meanwhile, Kano State Governor Abdullahi Umar Ganduje, in a statement on Sunday, expressed his shock over the great lost of the 17 men and send condolences to the family.

“Their death came to us very shocking. This is a great loss not only to their families or to the people of Sani Mainagge, of Gwale local government where they came from, but to all of us, the government and the people of Kano state,” he said.

“I am, on behalf of the government and people of Kano state, commiserating with their families, people of Sani Mainagge, Gwale local government, friends and well-wishers. Ours is to continue praying for the departed souls. Allahu Akbar,” he said.