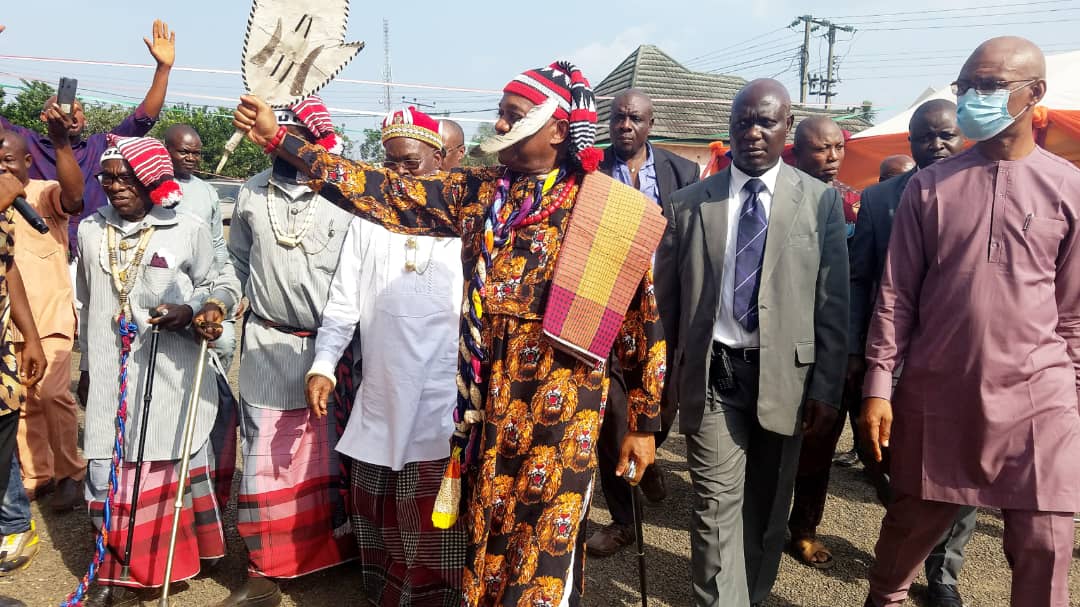 Pleased with his infrastructural strides in developing their community and Senatorial district, the Ihechiowa community in Arochukwu LG of Abia-North on Sunday conferred the apex chieftaincy title on the Chief Whip of the Senate, Senator Orji Uzor Kalu.

The title “IKENGA ATA IGBO-UKWU UMUZOMGBO IHECHIOWA” was conferred on Senator Kalu by the traditional ruler of the community HRH, EZE LINUS NTO MBAH, (Eze Udo 1) of Ata Igbo-Ukwu Umuzomgbo Autonomous Community.
The event was preceded by a Holy mass at Mater Misericordia Catholic Church, Umuzomgbo Ihechiowa, Arochukwu followed by a ceremony held at the Palace of Eze Linus.

Outlining the reasons for bestowing Senator Kalu with the title, Eze Linus enumerated the infrastructures attracted by Senator Kalu to their community, the traditional ruler said the Chief Whip had distinguished himself at the Senate within his first year in office.

In his words ” We are gathered here today to witness the conferment of the highest title in our land to our great son and Senatorial representative. Within his first year at the Senate, he has distinguished himself in many ways most especially the road construction he has attracted to our community.

We are more than pleased to have him as our Senator and the Chief Whip of Nigeria. This title is our way of recognizing his achievements and immense contributions to the 9th Senate of the Federal Republic of Nigeria and the development of the Igbo Nation.

A major highlight of the event was the decoration of Senator Kalu with unique traditional attire and his adornment with other traditional items by HRH Eze Okereke O. Obasiugo Ochi Oha Eze Ikwun Autonomous community.

Expressing his gratitude to the elated audience gathered at the Palace, the former Governor and serving Chief Whip of the Senate, described the title as a task to facilitate more developmental projects to the community and Abia North.

He said “This title means “the right-hand man” for me this is an encouragement to do more for our community. As a legislative, my main duty is to make laws for our people but we are going beyond that by executing infrastructural projects for our people. During the last election, Ohafia gave 96% votes so don’t be surprised because there are five new roads ongoing in Ohafia.

“President Buhari appreciates Abia-North because this is the only zone in the entire Southeast and South-South that gave him 68% votes in the last election. It is the more reason he loves our zone and has approved the 12 billion naira Umuahia- Arochukwu road and other projects.

Dismissing the misconceptions the held by Southeastern’s about his party the APC, Kalu said the party was not an Islamic party, the chief Whip explained to the audience that the party belonged to all Nigerians regardless of tribe or religion saying that he is a staunch Catholic but still belonged to the party.

The latest title conferment, adds to the over 200 traditional titles held by Senator Kalu, recall that in 2018 he was given the Title: Danbaiwan-Hausa (Gifted Son of Hausa kingdom) by the Emir of Daura in President Buhari’s hometown.