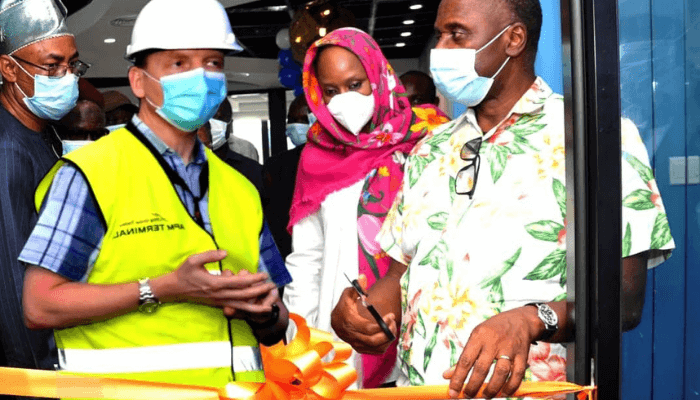 The Minister of Transportation, Rotimi Amaechi, has commissioned a new operation command center built by APM Terminals Apapa to boost efficiency and service delivery at the terminal.

Speaking at the launch, Laursen said the new Operation Command Centre will, among other benefits, strengthen the exchange of information and coordination in the movement of containers out of the port. This, he said, will enhance operational efficiency and provide a better work environment at the terminal.

He said: “The center is the brain of the business. It is about day-to-day execution where information is exchanged. This is where we decide which box to put where at which time and the equipment to pick it up so that everything works together.

“It will help locate containers whether to go on a truck or barge at the right time. It will also help you to know where a container is and allocate a piece of equipment to lift the container. That is what the center will help do,” he said.

With a terminal of this size and with this equipment, he said APMT should be able to put around 40 to 45 moves per hour across the quay, which would improve productivity.

“It gives virtually a better opportunity to collaborate and will help in information sharing among staff. It will also provide space for social distancing and there will be every opportunity for communication.

“We are targeting about 700 deliveries per day and we would like to double that, so we need stronger delivery capabilities so the importers and the exporters in Nigeria can get faster access to their cargo and possibly at a cheaper rate,” he added.

Mr. Laursen also said that the company is in support of the Federal Government’s drive to achieve a rail transportation system in the movement of cargo out of the port to relieve the roads of traffic congestion.

“For an import container terminal that we are, getting the boxes out of the port is the key challenge and with the road situation as it has been in Lagos for a very long time; it makes sense to try to reduce the traffic using the rail. We are here to support and to partner with the government in achieving this,” he said.

Also speaking, the Transportation Minister, Rotimi Amaechi, said the rail line, when completed, will facilitate the movement of containers out of Apapa Port, thereby reducing pressure on the roads.