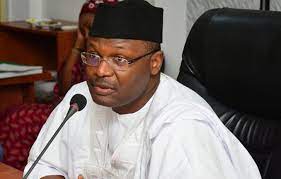 Yakubu, who summoned an emergency meeting of the Inter-agency Consultative Committee on Election Security (ICCES) at INEC headquarters, Abuja, warned that the activities of secessionist non-state actors is threatening the conduct of the governorship election following the heightened human and material losses witnessed in and around the state since the committee met last month.

He explained that report reaching the commission suggests that “the stated goal of many of the attackers is that the governorship election scheduled for 6th November 2021 must not hold”.

Expressing deep concern of the commission, the INEC boss said it is seriously concerned about the safety of INEC staff, ad hoc staff of the commission as well as security personnel who are also being targeted by the attackers.

According to him , thousands of young Nigerians that the commission  intend to deploy for the election, most of them who were National Youth Service Corps (NYSC) members and university students, need to be reassured of their personal safety.

“At the same time, deployment for the election will involve the movement of huge consignments of sensitive and non-sensitive materials to the 21 local government areas of the state, 326 wards or registration areas and 5,720 polling units.

“That means over 6,000 locations to be protected. If we add that to about 26,000 officials that will be deployed for the election, we begin to appreciate the magnitude of the challenge of securing the Anambra governorship election which is only thirty-two days from today.” he said.

Meanwhile, the National Security Adviser (NSA), Babagana Mongonu, has reassured that the security agencies will secure lives and property before, during and after the election scheduled for November 6.

Represented by Salisu Galadima, the NSA acknowledged that the violent activities of separatist group in the South-East constitute clear and present danger to the nation’s democratic consolidation, noting that the group is bent on scuttling the election.

He, however, assured that the government is committed to the protection of lives of law abiding citizens in Anambra State and called on peace loving sons and daughters of South-East extraction to join hands with constituted authority to promote peace and development in the region.