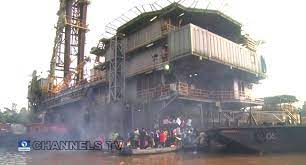 Residents of Egbemo-Angalabiri in Ekeremor Local Government Area of Bayelsa State have shut down operations at the specialty RIG 301 in protest against the operations of the international oil companies in the community.

The residents, who carried various placards had gathered on Tuesday, lamenting poor welfare and non-compliance by the oil companies with the agreement reached with the community.

The protesters later took a 30-minute boat ride from the community jetty to the specialty RIG 301 where operations at the flow station were shut down.

In their demands, they asked the oil companies operating in their community to honour the Memoranda of Understanding (MoU) signed before the specialty RIG 301 operated by Shell Petroleum Development Company in the community would be reopened.

One of the protesters, Ebi Musi, said the companies have refused to yield to their demands and vowed that the residents would continue to picket the facilities until the issues were addressed.

The Bayelsa State government has always advocated that oil companies should ensure indigenes of host communities are catered for as part of their corporate social responsibility.

In response to the demands of the residents, Governor Douye Diri said indigenes of host communities should be treated fairly.

While residents of the community insist the operations at the specialty RIG 301 will not resume until their demands are met, the governor said the government would continue to prevail on the people to be law-abiding, even in the process of making their demands.