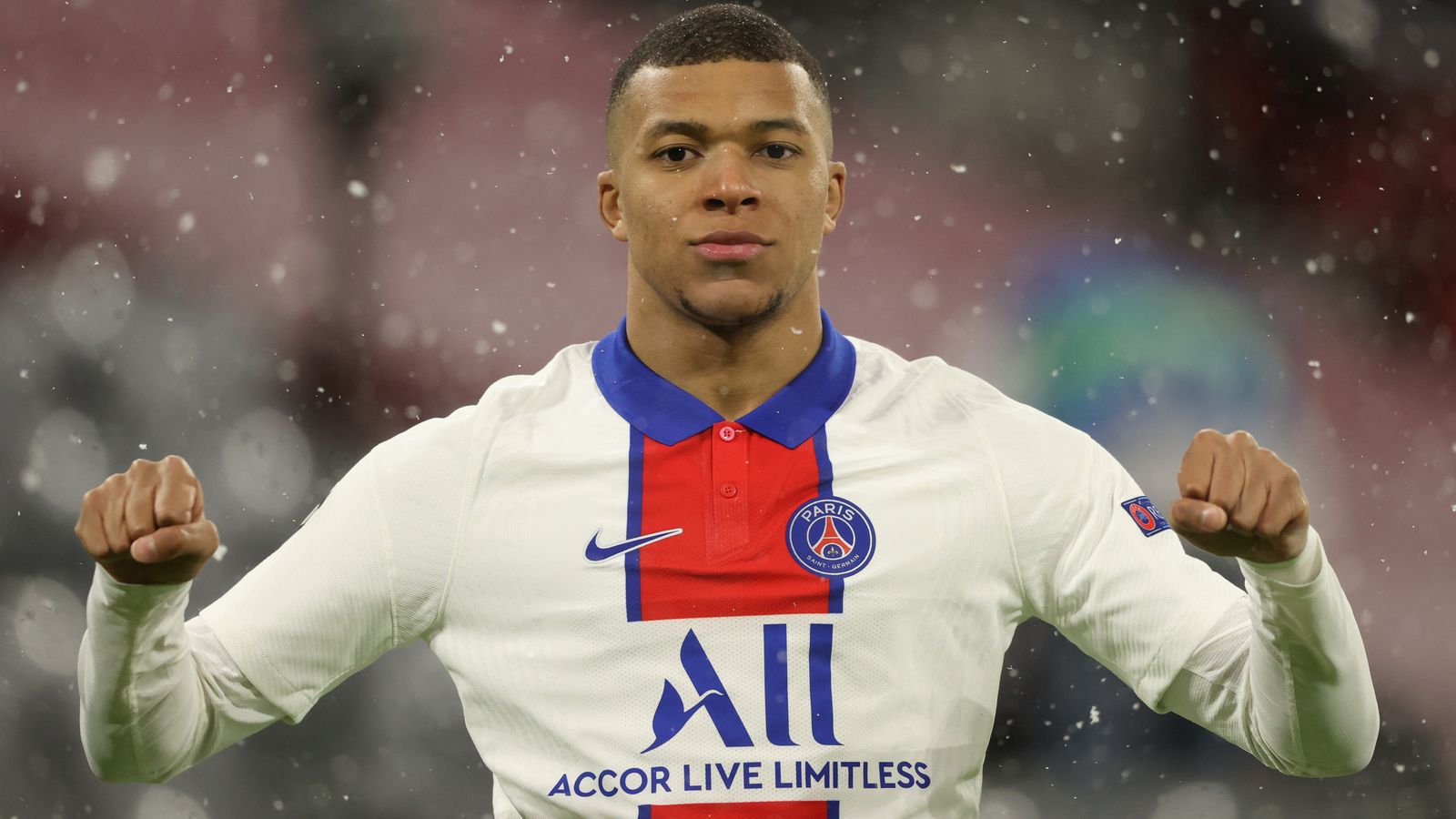 Mbappe’s opener was fumbled by Manuel Neuer into the bottom corner with less than three minutes on the clock at a snow-covered Allianz Arena, as Mauricio Pochettino’s side threw themselves at everything from first whistle to last in a match of incredible tempo and intensity.

They doubled their advantage before half-time after Bayern switched off from a corner and left Marquinhos to turn Neymar’s ball forward beyond Neuer, although the PSG captain was injured in the process and forced off moments later.
Eric Maxim Choupo-Moting pulled a goal back with the interval approaching from Benjamin Pavard’s cross with another, from Joshua Kimmich, allowing Thomas Muller to head past Keylor Navas and level up on the hour mark.

Neymar and Mbappe had caused real problems when allowed to combine and punished Bayern again for PSG’s third eight minutes later, with the latter’s disguised finish inside Neuer’s near post giving the French side a sensational first-leg advantage – and three away goals – ahead of Tuesday’s second leg at the Parc des Princes.

In the process, they stopped Bayern setting a new club record of 20 European Cup games without defeat, by inflicting their first in the Champions League since Liverpool won 3-1 at the Allianz Arena in March 2019.

Man of the match: Kylian Mbappe.

Bayern had reached the quarter-finals in 10 of the last 12 years and progressed from all but one of those ties. This was their territory, so it was no surprise they began with a bang at the Allianz Arena, hitting the bar through Choupo-Moting’s header from a corner inside two minutes.

But within seconds, their game plan took a major blow. An unusually committed press from Neymar caught out Lucas Hernandez on the halfway line, and after a one-two with Angel Di Maria, PSG were on the break.

The Brazilian’s perfect release to Mbappe on the edge of the area put Bayern in big trouble although after a world-class build-up the tame finish that followed should have been simple for Neuer, who instead let it through his legs and into the bottom corner.

PSG could have doubled their lead after 11 minutes following another free run and pass from Neymar to Mbappe, who was this time marginally offside when teeing up Julian Draxler to fire home.

But they did get their goal from another moment of lax Bayern defending shortly after, when Neymar’s hook from a cleared corner caught the home defence pushing up, allowing Marquinhos to ghost in to beat Neuer and leave PSG in dreamland.

Those would prove the visitors’ only two shots on target of the half, but Bayern struggled to truly test Navas despite their territorial dominance. It took a lapse in concentration from makeshift defender Danilo Pereira – dropping in to replace Marquinhos – to provide them hope of a comeback, when Pavard’s cross was headed home by an unmarked Choupo-Moting from 12 yards.

After half-time, the pressure continued with Bayern beginning to shoot on sight, as Pavard and Jerome Boateng both pulled diving saves out of Navas.

But the hosts’ soft underbelly, which has shipped the second-highest number of goals of any Bayern side at this stage of a Bundesliga season since 2000, was again exposed as Neymar was denied by the legs of Neuer after good work from Mbappe.

But Bayern showed their attacking class to finally give themselves a proper foothold in the tie and level from another cross, as Kimmich’s free-kick was nodded home by Muller on the hour mark.

Form suggested that would be the moment the Champions League holders would wrestle control of the tie – but that hope was extinguished in less than eight minutes. Neymar, again untracked, fed Mbappe from deep before the Frenchman stood up Boateng and tucked the ball inside the near post.

Bayern did not let up given their immense attacking capability on display, but PSG’s defence, which had thrown themselves in front of everything already, was in no mood to let another lead slip.

David Alaba fired just wide of the far post and Muller’s effort hit his standing leg in the closing moments, but Navas was not to be beaten again as Pochettino notched up another stunning Champions League win on away soil.

Man of the match – Kylian Mbappe

Who else? Mbappe could have had a hat-trick given the chances he had on the night, but again he proved the man for the big occasion in this stunning first-leg win.

His coolness was best personified for PSG’s winner, when after forcing Boateng back into his own box, showed superb composure to disguise his finish and fool Neuer by tucking the ball inside the near post after shaping to shoot across goal.

PSG, having been knocked off the top of Ligue 1 by Lille last weekend, visit Strasbourg on Saturday; kick-off at 4pm.